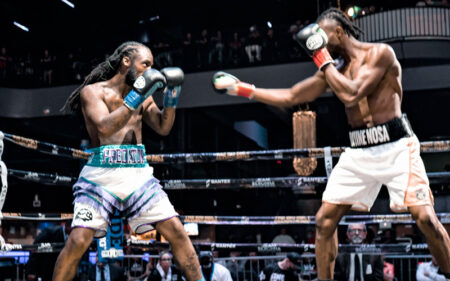 Austin, Texas. – The first day of the tournament “The Big Belt Championship” started in spectacular fashion, thrilling fans at the Austin Coliseum via great fights.

The performances of all the boxers were outstanding, with the seven bouts presented by The Boxing Showcase with the support of the World Boxing Council.

In the main fight of the night in the Light heavyweight division (175 lbs) at 4 rounds, the Nigerian Nosa Divine Nehikhare, based in Austin won by unanimous decision (39-37 from the 3 judges) against Dequint Hill, to earn his Place then to the semifinal stage.

At the weigh-in ceremony, Fernández did not make 126 pounds, so he was automatically disqualified and DeSpain passed to the semifinals, irrespective of the bout.

In an exciting match, the local Atanacio “Nacho” Pérez obtained his first victory as a pro by defeating local Nathaniel Bonner by majority decision (39-37, 38-38, 39-37) in a Lightweight match of four rounds and progressed to the semifinals.

In out-of-tournament combat, Héctor Coronado Jr. kept his undefeated record by knocking out Daniel Wright with a spectacular 52 seconds second round KO at 154 pounds.

In the Middleweight division (160 lbs), American Malik “One Punch” Calhoun defeated Mexican Alejandro “Alex” Heredia by KO in the second round.

At heavyweight Vercell Webster was defeated by Dionardo Minor via unanimous decision. A major result for Minor, who obtained his pass to the semifinal.

While, in the first fight of the card, Davelle Smith spectacularly knocked out Texan Ricky Evans, at 1:40 of the first round in the Middleweight division (160 lbs).