Pagan vs. Marrero III 2, unofficial rematch of the year set for December 18 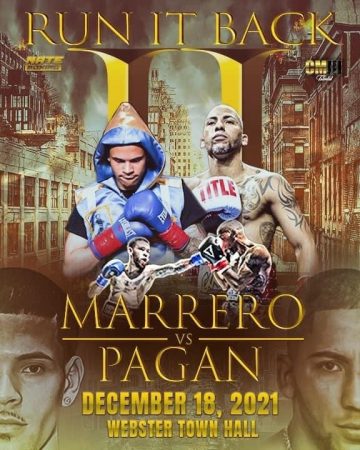 “I am very excited we were able to get the rematch between Pagan and Marrero so quick,” RPE promoter Jose Antonio Rivera commented. “These two warriors put their heart and soul in their last fight and the fans were not disappointed. As a promoter these are the type of fights we love to put together. We are 3 weeks away from another great boxing event to see some talented up and coming future champions. Webster Town Hall is going to be electric!”

Pagan and Marrero will be fighting once again for the vacant New England Super Lightweight Championship in the Dec.18th 6-round main event.

The original Pagan-Marrero was non-stop, action-packed throw-down which the judges’ scored 58-56 in favor or Pagan, 55-59 for Marrero, and 57-57. The scoring was originally announced as a split-decision win for Marrero but, in retrospect, both fighters have taken the emotional outcome changes in stride. Some fuel, though, has been poured on the fire, largely through social media.

“When the fight was done,” Pagan commented, “as a fighter, you know if your fight was won, lost or very close. It was a little close, but that I won the fight. When the decision was announced that he had won, I closed my eyes, because it reminded me of my amateur career. I definitely won a few fights, I dominated, but I didn’t get the decision. Anything can happen when it goes into the judges’ hands. The judges didn’t see me winning, okay, but then they reversed the decision. I thought that they had gotten it right and I had won, but it was announced as a draw. It is what it is, okay, because the judges’ job isn’t as easy as people think, They saw ups and downs and had it a draw.

“II was thinking, here we go again, when it was announced a draw,” Marrero said. “For some reason, every time I fight in Massachusetts it’s always controversial. I had dropped to my knees in happiness and when the second announcement was made, I thought they were giving him the win. A draw? I’m not upset but I was surprised because I felt I had won. I went home thinking it was a draw, not a loss, and hopefully we’d have a rematch. And we do December 18th.”

Pagan vs. Marrero is an example of not needing two great fighters to have a great fight. They’re evenly matched and both fighters have tremendous heart.

“People had asked if I wanted a rematch and I said, yes, I’m thinking about it because it was a draw,” Pagan offered. “I wasn’t going to say no if it was offered, but the No. 1 reason for me to fight him is for the New England Championship. As long as I fought him for the title, I was for it because I want to fight for the belt and that’s what is my target. That was my feeling at the beginning, but things changed a little, because he changed. I don’t know what people told him, I’m not some kid and I had a lot of respect for him. But then he started texting me. I don’t know if it was to spice up this fight, but he crossed the line. He said a lot he shouldn’t have said. I’ always humble and respect all fighters because they’re risking their lives. I don’t know why he said what he did, but he’s given me even more motivation. I want that belt! I’m training double to beat him and shut his month. I still have some respect for him, but it’s not the same.

“I made a lot of mistakes in our first fight and made the fight much harder than it was supposed to be. I’ve been working on adjustment and, hopefully, on December 18th it will pay-off.”

“I always have a little room for improvement after a fight, and we saw some things I needed to improve for the rematch,” Marrero explained. “I’m more mentally prepared to do things and will be much smarter in the ring. Physically, I’m a lot stronger and sharper. The key for me is being mentally prepared and sharper. His (Pagan’s) opponent for his last fight fell out and my manager, Nate Torres, contacted me saying I had been offered an opportunity to fight Pagan. Without hesitation, I said yes. I’m always in the gym and ready to fight. I came in 2-pounds under and I’m on weight right now for this fight. The only thing I had to prepare for is he’s a southpaw.

“We had a great fight. He probably thinks he won a few rounds, I felt I won the fight. He missed more and I connected with the cleaner punches the judges could see. In the third or fourth round, I hurt him with a body shot. He folded and I hit him with another good shot.”

In the co-featured event, Danbury (CT) super lightweight Omar “The Beast” Bordoy (11-1, 3 KOs) faces an opponent to be determined in the 6-round match.

Undefeated Worcester cruiserweight prospect Derek “Hightower” Edmonds (3-0, 2 KOs), a 3-time N.E. Golden Gloves champion, has been added to the card in a 4-round bout against TBA.