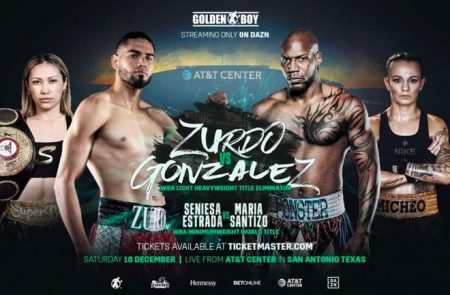 Rising super featherweight contender Lamont Roach Jr. (22-1-1, 9 KOs) took on former world champion Rene “Gemelo” Alvarado (32-11, 21 KOs) in a 10-round fight for the vacant NABA Super Featherweight championship. The fight was equally match as both fighters came forward and took turns exchanging blows. There were a few moments where Roach, Jr. landed heavy blows that rocked Alvarado; but the veteran warrior was strong and he eagerly returned. The fight went to the score cards with 98-92, 100-90, and 98-92 all in favor of Roach, Jr.

“I feel good about this victory. I just beat a man who was a world champion two fights ago,” said Roach, Jr.  “This is the type of victory that I need to show that I am ready for a world title fight. Rene Alvarado is a warrior, a tough guy who I couldn’t knock down, but I feel we did our job today. I want the champion next, Roger Gutierrez.”

“I don’t know what to do anymore. The job we did today was excellent,” said Alvarado. “On my count I believe the fight was mine. When I heard unanimous decision, I knew that was right, but when they said Roach, Jr.’s name I couldn’t believe it. I know I won the fight.”

2012 U.S. Olympic Bronze medal winner and current WBC Flyweight World Champion Marlen Esparza (11-1, 1 KOs) defended her world title, for the first time, in her home state against the seasoned former two-time world champion, Anabel “Avispa” Ortiz (31-5, 4 KOs) of Mexico City, Mexico. ‘Avispa’ proved to be a difficult fight for Esparza, as the 13-time world title defender brought with her experience and technical ability. Esparza, however, was not intimidated, as she went after Ortiz and did not back down after Ortiz’ attacks.

After an exciting fight, between to veteran warriors, the score cards ruled in favor of Esparza with scores of 100-88, 95-94, 99-90 to win the fight via unanimous decision. “My performance was good considering I just came back after contracting Covid-19,” said Esparza.

“I wanted to see what it would feel like to come back and I can say that there is some fatigue. We knew she was a counter puncher so we were prepared for it, but I can feel a little of the fatigue. Now that is all over and I know what it feels to come back, I want all the belts. I want Naoko Fujioka from Japan and just unify this division.” “I think I delivered a great fight, simply the referee did not favor me,” said Ortiz.

“He counted two slips that were obviously not knockdowns, she pushed me. I am very unhappy because they put someone in the ring who does not know how to do his job, especially when this is a world title fight. It is a disservice to the sport. They took the victory away from me.”

Leading the fight card on the Golden Boy Fight Night on Facebook Watch, two undefeated fighters, Victor Morales (15-0-1, 8KOs), of Vancouver, WA and Rudy Garcia (12-0-1, 2 KOs) of Los Angeles, CA, both put their undefeated records on the line in an exciting 10-round featherweight fight for the vacant WBC International Featherweight Title. Both fighters exchanged equally, both landing heavy shots to the face and body. Neither fighter backed off, both moved forward trying to tear down their opponent. The crowd loved their style as they cheered on both fighters and gave them a standing ovation at the conclusion of the 10th round. Ultimately, the judges ruled the fight a draw, with scores of 96-94, 93-97, 95-95.

“I am really upset with the decision, because I feel like I won that fight,” said Garcia.

“Morales is a good fighter, I know him from the amateur world, but I think that I pulled off the victory in the end. I really want the re-match to prove that I won this fight.”  “I feel like I won the fight. I feel like I broke him down from the very beginning,” said Morales. “Yes, we got hit. I got things to work on, but I still feel like I won this fight. Let’s do the re-match next, let’s run it back and prove who is the best.”

Luis Hernandez (21-2, 19 KOs) of Chihuahua, Mexico, took on Ruslan Madiyev (14-2, 5 KOs) of Indio, CA in a scheduled 10-round super lightweight bout. The fight went the distance as both fighters went back and forth with Madiyev dictating the pace of the fight. Madiyev, was relentless in his pursuit of Hernandez, and he delivered powerful blows that shook Hernandez. But Hernandez wouldn’t go down, he showed a lot of heart trying to keep Madiyev at bay. The score cards did not lie, awarding Madiyev the victory by unanimous decision with scores of 91-99, 92-98, 91-98. “I had seen past fight footage of Hernandez and I noticed that he kept his left hand down,” said Madiyev.

“So I made sure to prepare and attack with that right hook, and I kept catching him. I am very proud of my team for the amazing preparation, and I can’t wait to come back in the ring and fight for a title soon.”

Rising welterweight star Raul “Cugar” Curiel (11-0, 9 KOs) of Tamaulipas, Mexico, was scheduled for a 10-round fight for the NABF Welterweight Title against San Antonio’s Kendo Castaneda (17-5, 8 KOs). Curiel, who has been training with Hall of Fame trainer, Freddy Roach, really demonstrated intelligence in the ring as he landed heavy shots on Castaneda knocking him down in the third round. Castaneda, trained by San Antonio’s boxing star Jesse James Leija, quickly recovered and aggressively went after Curiel. The crowd erupted in a cheering war come cheering “Cougar” others Kendo, as both fighters traded shots. However, Curiel delivered a devastating blow to Castañeda in the seventh round winning the fight by knockout.

“I am very happy to be in Texas and to make my first title defense in front of my family. Castaneda was a strong opponent, but I am glad we were able to show off all our hard work and get a victory. This was one of my best performances and I am so happy to be able to share it with everyone,” said Curiel.

The second fight of the night featured Zurdo Promotions’ heavy-handed prospect, John “Scrappy” Ramirez (8-0, 7 KOs) of Los Angeles taking on Miguel Rebullosa (4-13, 5 KOs) of Coahuila de Zaragosa, Mexico in a 4-round bantamweight fight. ‘Scrappy’ displayed his skill level in the ring as he knocked down Rebullosa three times in the second round winning the fight by TKO at the 2:22 mark of the round.

Opening up the event at the AT&T Center in San Antonio, “Slick” Nick Sullivan (5-0, 1 KO) of Norfolk, VA, took on Erick Benitez (2-2, 1 KO) of Guadalajara, Mexico, in a 4-round lightweight event. The fight went the distance as both prospects often found themselves entangled as they tried to find their shots. The score cards read 39-37 from all three judges ruling in favor of Sullivan, winning the fight by unanimous decision.