Exclusive night with Peter Fury and guests in Bolton, England 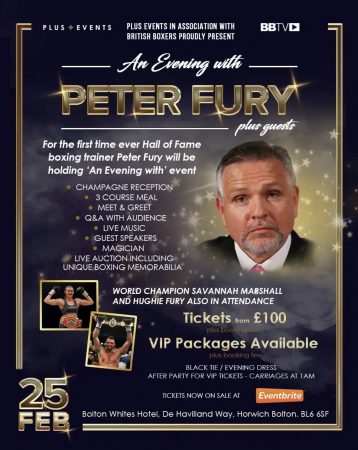 For the first time ever, ‘Hall of Fame’ boxing trainer Peter Fury will be holding ‘An Evening with’ event at the Bolton Whites Hotel on Friday 25th February 2022.

Peter is one of the most respected men in boxing and his achievements speak for themselves. He trained his nephew Tyson Fury to the world heavyweight title when the Gypsy King dethroned legend Wladimir Klitschko in 2015.

Peter has since guided his son Hughie to two world title shots and he stands on the verge of a third. Recently he has also steered Northeast starlet Savannah Marshall to a world title. Savannah is considered by many to be the best female boxer in the sport today.

On the evening, Peter will also be joined by Hughie and Savannah and will speak in an intimate setting about his life in and out of the ring, the ups and downs, highs and lows and answer questions from guests in attendance.

“I like intermingling with people so I’m looking forward to it, meeting other boxing fans and getting to speak with them direct is good, plus I like a good dinner!” laughed Peter.

“This is the first time I have agreed to do one of these types of shows, I’ve been asked a few times and this will likely be the last time I will ever do it. Outside of boxing I am a very private person and when I have time off after training camps, very few people will see me. So this is a rare event but something I think will be a nice experience, meeting up with like-minded people and seeing old friends.” added Peter.

A donation will be made to a selected charity on the evening and Peter has revealed he will also donate his appearance fee to charity too.

Guests will have the opportunity to meet and greet with Peter, Hughie and Savannah and have photo opportunities. Professional photographer in attendance also.

Other entertainment on the night will include, live music, guest speakers, a magician, great food and drink, plus a special lifetime achievement award for a local former champion boxer.

There will also be a live auction including unique boxing memorabilia.

An after party: For all VIP ticketed guest, carriages at 1am.

email events@bbtvgroup.com for any ticket or sponsorship enquiries

There are only 25 tables available in this intimate setting

Savannah Marshall: I predict Maria Lindberg wins by KO in round five 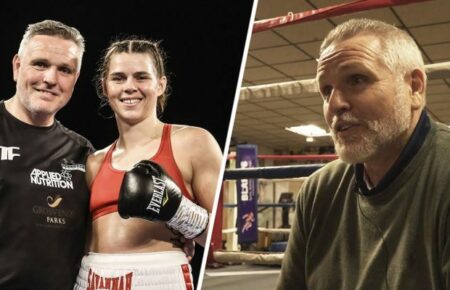 Hannah Rankin and Maria Lindberg head up a huge night of world championship boxing on Friday November 5 when they clash for the IBO and WBA World Super Welterweight Titles, live on Fightzone.

Scotland’s Rankin and Swede Lindberg, 19-7-2 (10), are both former world champions. Rankin, 10-5 (2), previously held the IBO belt, with Lindberg a former holder of the IBF version.

This is a pivotal moment in the careers of both women – the winner will eye up future unification bouts, while whoever comes off second best could face a long road back to the top.

Ahead of their contest at Tottenham Hotspur FC’s Banqueting Hall, some key figures from the sport have given their predictions on who they see coming out on top.

Savannah Marshall (The ‘Silent Assassin is the undefeated WBO World Middleweight and has previously beaten both Hannah and Maria with stoppage victories): ‘I predict Maria Lindberg wins by KO in round five!’

Peter Fury (Trainer of top heavyweight Hughie Fury, Savannah Marshall and former trainer of Tyson Fury): ‘I think Hannah Rankin will come through.  I believe Maria is now in her twilight years as far as boxing goes but it’s not just that, Hannah is tough.  She’s got a lot of heart, she trains hard and she’s improving as well.  So I see Hannah coming away with a convincing win.

‘They both lost to Savannah, who is elite and probably the number one boxer on the planet.  She hits phenomenally hard, so it’s no disgrace to lose to Savannah Marshall.  You can’t really gauge anything on their losses [to Savannah], but looking at both fighters, Hannah has talent, sheer willpower and she’s younger and hungrier and I just think she’ll come through with flying colours.’

Barry Jones (Former WBO World Super Featherweight king, turned top commentator and analyst):  ‘I think this might be the fight where Hannah finally gets over the line and takes a more recognised world championship.  The first thought is that Lindberg is a former world champion and being strong and the bigger puncher, will find a way to win.

‘But when you digest current performances, I feel that the timing suits Rankin. She’s fresher, has a great chin and will be the bigger fighter on the night. But she has to make sure her jab is sharp and solid to stop Lindberg from closing the gap.  So if Rankin can get that right, I pick her to win by either a decent points margin or by wearing down Lindberg late in the fight.’

Gary Jacobs (Scotland’s former European Welterweight Champion and world title challenger): ‘There is only one winner in my eyes – it’s Hannah to win for me. She has served her apprenticeship at the higher weight.  Now, this is at the right weight for her, I think she’ll win on points.’

Below is a selection of quotes from today’s press conference. You’ll find pictures at the link above.

I became world champion in lockdown and my first defence was in lockdown as well, so this is my first chance to [defend in front of] my family and friends and let them enjoy the experience with me.

I’m expecting a tough fight from Lolita. I’d be a fool to overlook anyone and she’s unbeaten and she doesn’t know what it’s like to lose. So yeah, I’m expecting her to come [forward] and I’m expecting the best version of Lolita.

I’ve always been confident in what I can do and yeah I know I’ll beat Claressa [Shields], I know I’ll beat Lolita but saying it and doing it are two different things. Lolita is in my way and I’ll get shot of her then crack on with Claressa.

She’s a champion and I have watched her fights. She’s a good boxer, but the only thing is, she has never faced someone like me. I’m well prepared and I’m confident in my skills. I can box on the back foot, I can come forward. So I’m excited for Saturday, I’m really excited. This is a big opportunity.

I’m a fighting man. I’m looking forward to the fight. I’ve prepared in the gym. He’s a tough durable fighter, I respect him. I’m not here for fighters who just get knocked over. That’s why I picked Hammer and we’re going to have a good fight.

Last time I was in England I beat a local hero David Price and I’m very happy to be here again. Hughie is from the Fury family but he’s not Tyson Fury. He’s younger and less experienced. I’m here to win and to put on a good show. I will try to break him and win the fight. I hope he isn’t just running. I am here to stand like a man and fight. We’re here to fight not run a marathon.

Christian Hammer is a fighter, he comes to fight and he comes to win. He’s a tough man. He will give it his all and I am expecting a good fight. That’s why we picked a fighter like Hammer. We’re not interested in walkovers, where people take a shot and fall over. Christian Hammer doesn’t do that and it’s another test for Hughie.

It’s a no-surrender businesses. There’s no playing boxing. We’re here to do a job and get it done properly. Hughie will fight to the last drop of blood in his body. The only time he’s going out on the floor is if he’s out cold. If he’s got any breath in him, if his heart is pumping, he’s getting up. That’s what he’s brought up to do. They’re fighters, this is a warrior sport.

As soon as I got the call to fight Chris Eubank I absolutely did not hesitate. It’s my opportunity to do to show what I can do. Actually everyone is beatable. He’s human and he’s got two losses. I’m pretty sure I will surprise everyone in the arena on Saturday.

Before you said the things you said on social media, you were just the guy I had to beat in order to get to the next guy. There was no malice, I didn’t like you or dislike you. But after seeing the things you said, now I have a reason to go out there and terrorise you. I hope you understand the position you’ve put yourself in.

It’s an amazing place, Newcastle. It’s a sporting city long seen as a sleeping giant both in football terms and in boxing terms, but not any more.

It’s takeover time for the football and, as far as boxing goes, we love coming here. We brought Prince Naseem, Joe Calzaghe, Nigel Benn, so many over the years, but I think this is the start of something new.