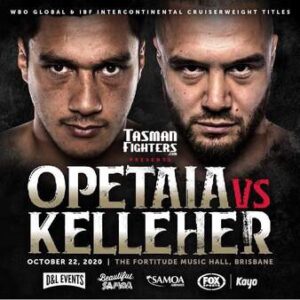 Fight Notes: The bout was scheduled for ten rounds with referee Steve Marshall stopping the fight at 1:50 of round six. The bout was made at cruiserweight.

Fight Notes: Former IBF lightweight champion Philip Holiday was the referee with Holiday stopping the bout at 1:21 after the Opelu corner threw in the towel signalling to stop the fight. Huni was making his professional debut and went straight in  for the domestic title shot on the back of being the 2019 amateur world super heavyweight bronze medalist.

Fight Notes: Time of the stoppage was 2:00 of round 6 with the bout scheduled for eight rounds. The bout was made at lightweight.

Fight Notes: The fight doctor stopped the bout between round six and seven so was a TKO at 3:00 of round six. The bout was scheduled for eight rounds. It was confirmed that Hussain had a broken jaw.

Fight Notes: The bout was stopped at 2:56 of round one and was scheduled for five rounds.