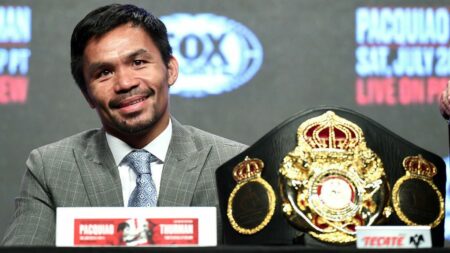 Manny Pacquiao officially announced this weekend his candidacy for the presidency of the Philippines. The former World Boxing Association (WBA) champion made his decision known at a political rally with several of his supporters.

Pacquiao has had one of the most spectacular careers in boxing history and has won much affection around the world. For many years he has been seen to be interested in helping people and has placed a special emphasis on his people in the Philippines.

The world has witnessed how Pacquiao has transcended beyond sport and has become a figure of hope for his people, so the news of his 2022 bid has been met with much positivity in the Asian country.

“Throughout my life I have never backed down in a fight, for the principles, for the honor of the people. I have stood up, I have stood and fought. It is time for the oppressed to win. It’s time for our people, who have fallen into poverty, to recover,” Pacquiao said during his meeting in Quezon City.

The WBA is proud that sports leaders are able to excel in different areas and become more and more integral. Pacquiao has always been an example inside the ring and we hope that his political career can continue to grow in favor of the people.