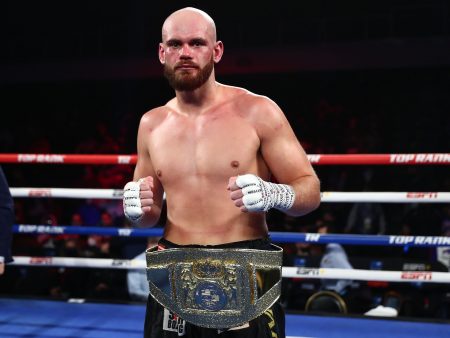 “Demolition Man”, as the European resident of Pittsburgh is nicknamed, made a smart fight and managed the distance well against the aggressive fighter Flores to get cards of 80-72, 79-73 and 79-73 in an eight round bout.

Pinchuk took advantage of his height and reach to work the distance well and keep the American veteran at bay. Although Flores worked hard in the early rounds and put the pressure, Pinchuk was able to handle the fight well and gradually gained the advantage thanks to his skills.

The 25-year-old Pinchuk improved with each round and at the end of the fight he landed a right hand that sent Flores to the canvas, but he recovered to finish the fight and hear the judges’ decision. 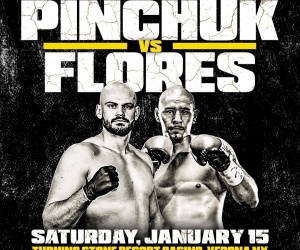 25-year-old Pittsburgh based Ukrainian, LYUBOMYR “THE DEMOLITION MAN” PINCHUK (13-2-1 8KO’s) is set to challenge for the vacant NABA Gold Cruiserweight Title against Virginia product JOSE MARIO “BAZOOKA” FLORES (8-2-2 4KO’s) in a 10-round title bout. Pinchuk was most notably seen on Ring City USA against rising undefeated American heavyweight STEPHAN “BIG SHOT” SHAW (15-0 11KO’S). Pinchuk moved up to heavyweight for the bout and brought the fight to Shaw over a tough 8-rounds. While falling short, Pinchuk used this opportunity as a learning experience and would return to his natural cruiserweight division in dominating fashion, just months later, with a TKO victory over Andrew Satterfield in his hometown of Pittsburgh.

“I’m very excited to be back to the ring” said Pinchuk. “Especially starting 2022 with a fight in the cruiserweight division, on such a big world title card. Thank you to everyone who was with me and supporting me during this whole time. Can’t wait for what the remainder of the year holds for us!”

“Lyubo has no fear” said Pinchuk’s trainer Mike McSorley, owner of The Conn-Greb Boxing Club in Pittsburgh, PA. “He’s never turned down a fight since turning pro. Not one. He has no sense of entitlement; he is always on time and gives 100%. He is back where he belongs at cruiserweight and he can beat anyone in the division right now.”

Jose Mario “Bazooka” Flores resides in Woodbridge, Virginia and has never shied away from a challenge. The eleven-year professional had his marquee moment when he upset undefeated ARMANDO PINA (then 16-0 11KO’s) in Indiana. Flores would return a few months later for the first time in New York where he would drop a close decision to undefeated JOSEPH “MACK WILLIAMS (then 12-0 8KO’s).

Star Boxing CEO JOE DEGUARDIA had this to say about Pinchuk-Flores, “We are very excited to secure this opportunity on a card of this magnitude for Lyubomyr to showcase his abilities. He is extremely tough and entertaining fighter who is back at his natural weight. Fans are in for a treat on January 15, first with Lyubomyr on the undercard and certainly when Joe Smith Jr. makes his first world title defense in the main event.”

SMITH-JOHNSON and PINCHUK-FLORES are promoted by Top Rank in association with Joe DeGuardia’s Star Boxing. Follow the action on social media by using #SmithJohnson and #PinchukFlores.