Chantelle Cameron added the IBF and Ring Magazine super-lightweight titles to her WBC belt after a fantastic victory against Mary McGee on Saturday.

The two women were headlining a Matchroom Boxing event at The O2 Arena in London on Saturday, with Cameron (15-0, 8 KOs) producing a sensational performance to come out on top.

It was non-stop action from start to finish, with both fighters throwing huge shots, but Cameron was getting the better of the exchanges in each round against McGee (27-4, 15 KOs).

McGee showed her toughness to last the distance, but there was only one winner, with the three judges scoring it 100-90, 99-91, and 99-92 as Cameron successfully unified the division.

Cameron said: “She was tough and we knew she would be. She was taking some big shots and was a powerful strong girl, but it feels amazing to now be unified world champion.

“It doesn’t matter to me who I face next, I’m taking the belts home with me and becoming undisputed. Thank you to all of the fans for coming out, along with MTK Global, Jamie Moore, Nigel Travis and Matchroom Boxing.”

Fight Notes: Molina was down in the opening seconds, and down multiple times whilst the bout lasted. Molina came with no desire and was seemingly just looking for a good time and place to lay down and out.

The last time Molina was down, the referee finally stopped the bout at 1:30 of the 2nd round.

Fight Notes: A much better and polished fighter in Fisher was in full control for the opening bell. In the 2nd round, Terrero was down three times, with the referee waving off the bout the third time. The corner also threw in the towel just prior to the referee waving it off.

British Craig Richards won the World Boxing Association (WBA) International light heavyweight championship after defeating Polish Marek Matyja by technical knockout in the sixth round during their fight this Saturday at the O2 Arena, in London, England.

Richards punished Matyja for almost the entire fight thanks to his punching combinations and the strength he showed. “Spyder” got a great win that helps him to position himself again among the top contenders in the 175-pound category.

A few months ago he fought the WBA champion, Dmitry Bivol, and although he could not win, he left a good impression and competed as an equal against the Russian. Now, against an opponent like Matyja, he displayed the best of his attack and looked comfortable in the ring.

The 31-year-old fighter entered the sixth round in total domination and connecting hard punches to his opponent. The Polish fighter was trying to survive but the punishment was too much, so the referee decided to stop the action.

Fight Notes: The bout went the 8 round distance with Scotney winning the judges scorecard, by a score of 79-73.

Fight Notes: Podlucki was down and for the count of ten in the 1st round. Time of the KO stoppage was 2:52.

Fight Notes: The bout went the distance with Hedges winning the referees scorecard. The score was 60-54. 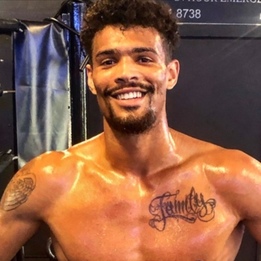 Jordan Thompson is itching make his mark on the Cruiserweight scene as he prepares to step through the ropes for the first time as a Matchroom fighter against Piotr Podlucki at The O2 in London this Saturday October 30 after a two year absence from the ring.

The 6′ 7″ powerhouse from Manchester is undefeated in ten fights since making his professional debut in December 2015, with eight of those wins coming inside the distance, and the former tennis star will be looking to make up for lost time after teaming up with Brian Peters and new coach Don Charles.

“Ever since that introduction it’s just been a snowball effect and the good news kept coming and coming and here we are now preparing for my Matchroom debut on a massive bill at The O2. That’s what dreams are made of. I’m very lucky to have a massive loving family and lots of friends. They’ve really supported me through the hard times as well.

“I’m really keen to get going and just make everyone proud, including myself. I feel like the person that I want to prove a point to more than anyone is myself because I’m the one who’s had those conversations with myself. I’m just trying to make myself proud and my family proud, and then I’ll be a happy man. No matter what has happened in your life, no matter what you’ve done, no matter the good, the bad, the ugly, there’s always light at the end of the tunnel and you can always bounce back from any situation.”

‘Troublesome’, 28, has suffered a stop-start tenure in the paid ranks but can now look forward to progressing in an exciting British Cruiserweight division that contains the likes of new Matchroom stablemates Lawrence Okolie, Tommy McCarthy and Chris Billam-Smith.

“For me to have my Matchroom debut on such a big show at The O2 is surreal. I’ve never boxed at The O2 so it’s an amazing one to tick off the list. I’m really looking forward to it and I’m definitely going to put on a show. I’m a 6′ 7″ Cruiserweight born in Manchester. 10-0, 8 KOs – stayed locked in because there’s more knockouts to come.

“When I get in the ring, I don’t just get in there thinking, ‘let me get the win on points’. I want to look good and I want to win in style, so I will be going for the knockout and it will come. I’m ready to steal the show and I’m ready to make my mark on the scene and the Cruiserweight division.”