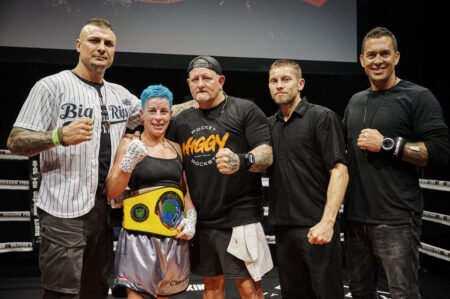 Australian Boxer Sarah Higginson 3-0-1 has already won the biggest fight of her life. By knockout. But it was a tough 12-rounder before she threw the final “punch” and she had to find a power within herself she didn’t know existed.

The 34-year-old lost 70kg in 11 months after making a vow to her family to lose weight and she’s now a State and Australian champion boxer about to fight for another national title.

“My dad (Stephen) passed away because of diabetes and had been very sick for a very long time,” she said. “The day that he passed away in ICU I stepped back and looked at my sister and my brother, who were both very fit, and I was size 18 and 120kg.

That was four-and-a-half years ago.

Higginson’s first step was to take three months off work and focus on fitness and diet.

“My dad brought us up like workhorses. You don’t stop til you get to your goal,” she said. “So I just kept going and going and going.”
She joined a boxing gym, but wouldn’t do the classes, preferring to train on her own.

“I didn’t feel comfortable. I didn’t want to partner up with anyone and make them feel uncomfortable or feel like I was holding them back,” she said.


After adding strength and conditioning to her routine, she conjured the courage to attend her first boxing class and freaked out.

“The guy I did pads with started to get a bit angry and frustrated. I dropped my gloves and walked right out,” she said.
Thankfully she returned.

“It was hard work, training twice a day and not letting anyone distract me,” she said.

Higginson had 15 amateur fights for 13 wins and two losses by split decision, before she teamed up with Dale “Big Rigs” Phillips at Big Rig gym in Malaga and through the sponsorship of her main employer, Forrestfield-based recruitment agency Skill Hire, turned professional in 2020.

At 155cm, she fights under the nickname “Pocket Rocket” and she lives the moniker with three wins and a draw on debut from her four pro fights.

Pro debut? Had a draw on debut against Indonesian opponent Dadya Nakhoir.

“I am not one to show all of my colours in round one,” she said.
“She did win rounds one and two, but as soon as I fire up … I had to work hard to get that draw,” she said.

Phillips said: “It is what she possesses up top. She is very strong minded, very determined, she has a lot of will. She doesn’t like to lose. She will go above and beyond.”

While many boxers have trouble making weight for an upcoming bout, Phillips said he had to tell Higginson, who fights at light flyweight (49kg), to train less so should could actually bulk up.
“She is one of those people you have to rein back and it is hard to find that nowadays,” he said.

“I have to keep her weight up and her training down. It’s normally the opposite.”
Phillips says her biggest weapon his her jab.

“But one of her biggest strengths is her eagerness to learn and take things on board,” he said.

But learnt in that debut fight and has learnt since in her four fights.

“Everything is a learning curve for her, but the biggest was the first fight, the draw,” he said.

“She was behind in the first round and had to turn it up a gear and bring it just to get the draw.”

Moss has had one pro fight after a solid amateur career.

“She switches a lot. She fights southpaw and orthodox. She tends to switch on the punch,” Phillips said.
“And she does it quite well. She catches a lot of her opponents with it. We are training for that and are also training to our A and B plan too.”

Higginson says Moss will make it four fights this year which is a heavy work load, but one she embraces.

“I can’t complain. I do have my days where I am like what am I doing? Who doesn’t? But I just want to show other girls out there that anyone can do this?” she said.

“Look at me I came from 120kg and am now fighting at 49kg. To me it is not about the belts, it is about showing other women that we can do this too.

“As soon as that belt goes around my waist, my attitude is ‘I have to go back to work on Monday’.

“I celebrate in my own way. But I am not done. When I am done I will tell you and then I will celebrate.

“Whether I win or learn from this next fight, and I do hope I come away with a win, whoever steps into the ring will have already won, because half of that crowd watching would never step into a ring and be hit in the face.”

After her last fight, a fourth-round knockout over local Danni Mace for the vacant Australian bantamweight title, she was leaving the venue and bumped into a couple of female fans.

“A group of girls pulled me aside and said they had been following my pathway from day to now and they are now boxing and losing weight and feeling more confident,” she said.

“And we want to come and meet you at the gym and train with you. That was better than winning the belt.”