Dave Allen returns this Saturday against Milen Paunov in Newcastle 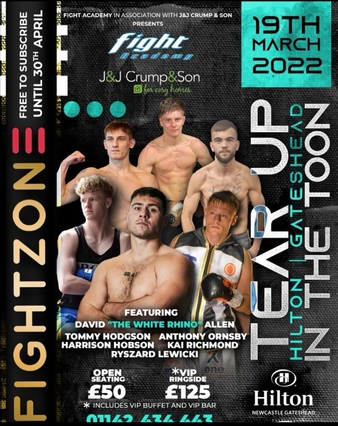 Known for his huge social media profile, the Conisbrough man can fight a bit too, having faced some top heavies in his 26-fight career to date – including Luis Ortiz, Tony Yoka and Dillian Whyte.

Now 29, Dave is on a ring return after taking some time away from the game after a 2019 loss to Liverpool’s David Price, with two wins added to his ledger since. With a mooted future clash against big-punching Alen ‘The Savage’ Babic potentially on the cards, the likeable Yorkshireman and former Commonwealth Title challenger is due to face Bulgaria’s Milen Paunov, 5-8 (4), in another comeback outing.

The night will also be a special occasion for exciting local favourite Tommy ‘The Hitman’ Hodgson (pictured) who will make his first appearance as a pro in his local city. Since turning over in August last year, all four of the unbeaten 25-year-old’s bouts have taken place in Yorkshire, though that hasn’t stopped the popular fighter bringing a loud army of support with him … including friend, Joe ‘The Benwell Bomber’ Laws!

From nearby North Shields, big things are expected of Hodgson, a former England international and senior ABA winner, with experienced promoter and manager Dennis Hobson describing his debut performance as the best he’d ever seen.

Another local fighter on the card is Wallsend’s Anthony Ornsby. The 23-year-old turned pro in 2018 and has racked up a 5-1 record – the only blemish coming to local rival, Seaham’s Jordan Ellison, in a close points defeat in September last year. Debutants make up the rest of the card with Doncaster’s Harrison Hobson, Newcastle’s Kai Richmond and Sunderland-based Pole Ryszard Lewicki all getting their first taste of professional boxing.

“This is another good show full of talented newcomers to the sport, and Dave Allen, who everyone knows is a real character – and the best thing is it’s completely free to watch on Fightzone,” said Hobson.

“Dave has been in some tough, exciting fights and is always good to watch, he’s always entertaining inside and outside the ropes. He started his career with me and I actually named him the ‘White Rhino’. I’ve got a lot of time for Dave and want what’s best for him now he’s back with Fight Academy.

“He had that break from the sport after the David Price loss, and I think that’s done him good. He still has ambitions he wants to achieve before he hangs the gloves up, and I want to help him achieve those. There have been various high-profile names flying about as future opponents for Dave, but the most important thing is he keeps active and winning.

“Tommy Hodgson is a real talent, and we’ll build him up in the Northeast into a real star. He was a top amateur and his pro debut was the best I’ve ever seen in my 30 years in the sport. I’m looking forward to seeing him in action again, as well as getting my first glimpse of Anth Ornsby.

“I love Newcastle, it’s a great city with proper fans who are passionate and know their boxing. This is just the start of some really special nights we’ll be having in the Northeast and it’s fantastic that fans can follow the journey on Fightzone.”

This show is sold out but can be watched LIVE/FREE on Fightzone.