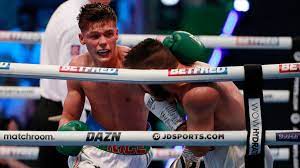 Hopey Price continued his ring education with a solid six round points win over Claudio Grande. The 21-year-old from Leeds was in control throughout and his dominance showed in the final round when he floored the Italian with the last punch of the fight. Grande made it to his feet but was defeated 58-55 on the referee’s card.

“It was a good performance, considering I had six months outside the ring, which for a young prospect like me isn’t ideal,” Price told Matchroom. “You can spar as much as you want but it’s not the same feeling as when you’re under the lights. Now looking forward, I’ve got Leeds in three weeks, that’s put me in very good stead – you’ll see the best of me in three weeks’ time.

“I remember Dave [Coldwell] shouting at me finish strong, finish strong, and he was just coming in – what we’ve been working on in the gym – I felt like I was catching him with that shot all fight and he just walked onto it lovely at the end and he was gone.

“I’m not fighting these journeyman and people with losing records, that’s a proper fight, he’s 5-0, three knockouts, I’m sure he wanted to be a star over there in Italy. He was coming to win and was defeated, I put a stop to that and gave him his first loss.

“You began to see it, it’s been coming slowly but surely, now over the next year or so you’ll see the best of me.

“I feel like I’m developing more as a fighter under Dave and more as a man – big thanks to Danny Wilson at Boxing Science, he’s making me a lot stronger, and I think you saw it there in the last ten seconds. I’m not just a young kid that people can walk through.

“I want to go right to the top. I don’t want to be a World Champion; I want to be a pound-for-pound star and Dave’s the man to take me there. I’ll keep listening, learning, developing and I promise you I will get there one day.

“I think fighting in Leeds on September 4 shows the confidence and ability – and the confidence my team has in me – to take a fight like that three weeks before and coming through with flying colours, no injuries. I’m ready to go in my hometown in front of 20,00 fans, I’ll steal the show there 100%.

“I’m ready for Zahid Hussain, 100%, I was ready for it back in September and the magic man didn’t turn up. So, we’ll see this time if he comes and if he does, I promise Hopey Price will come out the victor.

“I said it from my second pro fight, I believe there are levels to boxing and my boxing brain is one of the best in Britain. I believe I’m levels above Zahid Hussain.”