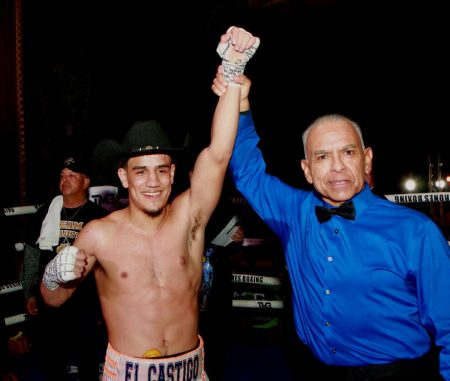 In front of a large hometown crowd, Medina was spectacular, as he dazzled fans with a dominating performance. In the early rounds, Medina set the pace by throwing hard punches from all angles. As the fight continued, Frausto was starting to break down from the punishment he was taking as Medina’s body attack was in full effect. Going into the final round, the bell rang, and the referee stopped the fight ten seconds later as he saw that Frausto could not continue.

“This is exactly how I wanted to start my year with a knockout against a well-regarded opponent, now I just have to continue from here,” said Medina. “Getting the stoppage in the final round was a big thing for me since it showed that I have a killer instinct and can carry my power throughout a fight. This year I am planning on taking the biggest fights of my career and emerging as one of the new faces of boxing, especially here in Texas.”

For those unable to watch the action-packed fight, the doctor was called ten seconds into the eighth round and advised the referee to stop the bout due to damage that had taken place to Frausto.

“Medina made a huge statement in this fight and we’re exploring all the options we can, to get him matched up with the best fighters in the world at this point,” said Medina’s manager Greg Hannely, president of Prince Ranch Boxing. “Medina has been brought up the right way, building a loyal fanbase in his hometown and now he is ready to show the world what he is capable of.”

“Medina is a homegrown guy in the Texas area, who has provided exciting fight after exciting fight and this win was yet another one,” said promoter Rick Morones, of TMB Promotions. “The fans love seeing him fight, and his thirteenth bout was one in which you can see all the progress he made. This was his best performance yet!”