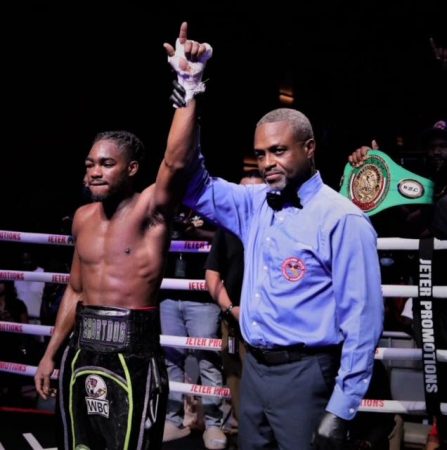 Streaking super featherweight, Jordan White won his 10th straight fight as he retained the WBC USNBC title with a 10-round unanimous decision over Derrick Murray in front of another Jeter Promotions sold out crowd at The Hall inside Live Casino & Hotel in Hanover, Maryland.

“This was an incredible card.  I had so many fans tell me that this was the best card they have attended. These are fans who have been to a lot of cards, so that shows you the quality of fights that were on this show,” said Tony Jeter, who along with his wife Christen, formulate Jeter Promotions.

In the co-feature, Demond Nicholson scored a third-round stoppage over Christopher Brooker in a scheduled 10-round super middleweight bout.

Scores were 40-36 twice and 39-37 for Mosca of Nottingham, Maryland. Williams is from Winchester, Virginia.

The time of the stoppage was 1:52 for Williams of Washington, DC, who is now 4-0 with four knockouts. Gladney of Philadelphia is 0-6.

Jeter Promotions fighter Brandon Chambers made the first defense of the ABF USA Featherweight title with a third round stoppage over TayShawn Autry in a scheduled six-round bout.

The time of the stoppage was 37 seconds for Chambers of Gwynn Oak, Maryland, who upped his undefeated mark to 8-0-1 with five knockouts. Autry of Brooklyn, New York is 4-10.

Venue: The HALL at Live! inside Live! Casino & Hotel Maryland

White of Washington, DC has a record of 13-1 with 10 knockouts. The 24 year-old White has been a professional for seven years. He won the WBC Intercontinental Youth title with seventh round stoppage over Ronaldo Solis (7-0-1). He followed that up with a sixth round stoppage over Miseal Lopez (11-0). In his last bout, White won the WBC USNBC Title with a split decision over Brandon Valdes (14-2) on February 19th at Live! Casino & Hotel Maryland. This will be his third consecutive and fourth overall appearance at Live! Casino & Hotel Maryland.

Murray of Saint Louis, Missouri is 16-5-1 with five knockouts. The 34 year-old Murray is an 11 year-professional who has wins over Cesar Alan Valezuela Zatarain (3-0-1) and Angel Flores (8-0). Murray is coming off a unanimous decision win over Tyrome Jones on June 11th in Saint Louis.

In the exciting 10-round co-feature, Demond Nicholson will take on Christopher Brooker in a super middleweight fight.

Nick Kisner (22-6-1, 6 KOs) of Baltimore takes on an opponent to be named in a cruiserweight bout.

Victor Williams (3-0, 3 KOs) of Washington, DC fights an opponent to be named in a welterweight fight.

Vince Mosca of Nottingham, Maryland will make his pro debut against Keynan Williams (1-2) of Winchester, Virginia in a light heavyweight bout.