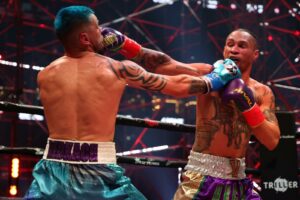 At the stroke of midnight on Saturday night in Atlanta, former world champion Regis Prograis defeated Ivan Redkach after he connected him with the Ukrainian in the sixth round with a punch to the side, causing him to collapse with exaggerated winces of pain, rolled on the canvas and forced to go to a technical decision.

After the six rounds fought, the 32-year-old Prograis reaped scores of 60-54, 60-54 and 59-54 in his favor. Redkach left the heart of Mercedes Benz Stadium on a stretcher. Immediately, the replay made it clear that it was not a illegal blow. This was the co-feature bout of the event promoted by Triller, which combined boxing with music, lights and dancing. Snoop Dogg, Jay Z, Justin Bieber and others sang.

In the first two rounds, Prograis was cautious and marked the distance with his jab, while finding space to unload his southpaw, his power hand, which finally came in clearly in rounds three, four and five.

With the victory, Prograis racks up two straight wins after recording his first career loss to Josh Taylor in October 2019 in the super lightweight World Boxing Super Series. He is in a process of redemption as he capitalizes on his next headlining opportunity.