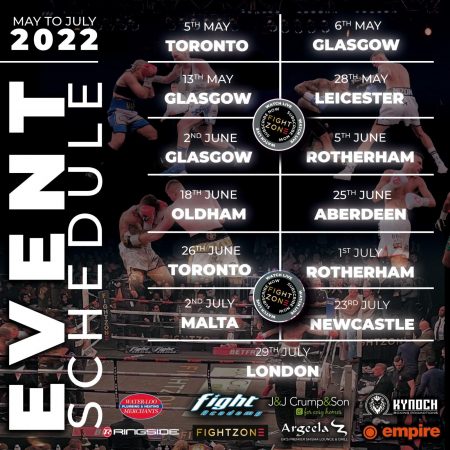 It’s a bumper three weeks of boxing coming up for Fightzone subscribers, including World Championship Boxing from Glasgow.

On April 30th we are at Bolton Stadium and they have an explosive Cruiserweight clash topping the bill. IBO Champion Jack Massey (19-1) will face Vaclav Pejsar (19-12) from the Czech Republic over ten rounds.

Massey has been extremely impressive lately and will step into the ring full of confidence having disposed of his last two opponents by emphatic knockout.

Pejsar is definitely not to be underestimated and has knocked out fifteen of his opponents in his nineteen victories. He has also upset the odds in his previous visit to British shores, stopping the highly-rated Craig Glover within two rounds.

The stage is set for a hard-hitting showdown on April 30th complemented by a stacked undercard, featuring a host of top prospects and highly-ranked contenders.

The drama continues in Glasgow at the Crowne Plaza on May 6th with ‘A New Era’. Topping the bill is a highly-anticipated international showdown over ten rounds between Marios Matamba (12-1) and Kane Gardner (13-2).

Matamba is making his first appearance in the UK and carries a big reputation having stopped 10 of his opponents.

Gardner is a big step up in class for Matamba and also has knockout power, stopping seven of his opponents inside the distance and winning his last contest via fourth round stoppage.

It’s a return to Glasgow on May 13th at Scotland’s premier arena for the historic homecoming as Hannah Rankin defends her WBA and IBO Super-Welterweight titles against dangerous Mexican Alejandra Ayala.

Rankin is Scotland’s first female world champion and this is the first time a female boxer has headlined an event at the OVO Hydro. It’s been an incredible journey for Rankin who has risen to the top of female boxing in only five years as a professional.

Throughout that time Rankin has travelled the world in search of opportunities. From London to America, from Malta to South Africa, it really has been a worldwide apprenticeship. A few setbacks along the way and now she has the reward of returning to her country to headline and defend those world titles.

In the opposite corner is Alejandra Ayala who represents a formidable first defence. Boxing has a rich history of top-level Mexican boxers and Ayala will represent her country with great pride.

This is Ayala’s chance to create her own history by becoming Mexico’s first female Super-Welterweight champion and she is using this motivation to reach new levels in training. It is a fascinating world title contest.

The event is supported by one of the strongest undercards in Scottish boxing history.