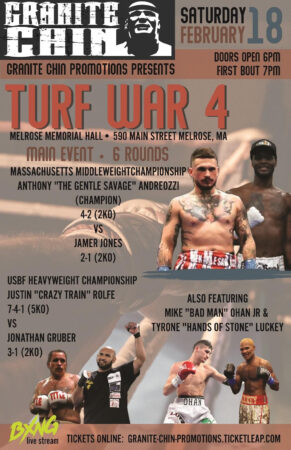 “Turf War 4”, which will be streamed live on BXNGTV.com, will mark Granite Chin’s first promotion in Melrose, which is located in Greater Boston.

Massachusetts Middleweight Champion Anthony “The Gentle Savage” Andreozzi (4-2, 1 KO) will make his first title defense in the 6-round main event versus challenger Jamer Jones (2-1, 2 KOs), of Pittsfield (MA). In his last fight this past November, Andreozzi captured the vacant title with a 6-round majority decision in Bridgewater (MA) versus Julien Baptiste.

The 6-round co-featured event pits former New England Heavyweight Champion Justin “Crazy Train” Rolfe (7-4-1, 5 KOs), fighting out of Fairfield, ME, against Jonathan Gruber (3-1, 2 KOs), of Fall River, MA., for the vacant USBF title. Rolfe will return to the ring for the first time in 10 months.

Former New England Welterweight Champion Mike “Bad Man” Ohan, Jr. (16-2, 9 KOs) will bounce back from his last fight in December against undefeated U.S. Olympian Tiger Johnson (7-0, KOs), in which the popular Holbrook fighter gained respect at a national level for his tough performance, albeit in a loss by way of a 5th round stoppage. The fight was at famed Madison Square Garden and streamed live on ESPN+. Ohan will face Puerto Rican junior welterweight Daniel “The Hudson Valley Kid” Sostre (13-22-1, 5 KOs) in a scheduled 10-round bout.

“This is going to be an action-packed card from top to bottom,” Traietti added. “Putting on the amateurs is always a nice way to get a look at the future of boxing in the area. I have no doubt that both the amateurs and the pros will come to fight and put on a show for the fans in attendance and those buying the live stream at BXNGTV.COM.”

Several USA Boxing-sanctioned bouts featuring local amateurs will be in action prior to the first pro  fight..

Tickets are on sale and priced (plus fees) at $70.00 (VIP Stage Seating), $60.00 (General Floor Seating) and $45.00 (General Auditorium Seating). Go online to purchase at https://granite-chin-promotions.ticketleap.com/ or from any of the participating fighters.