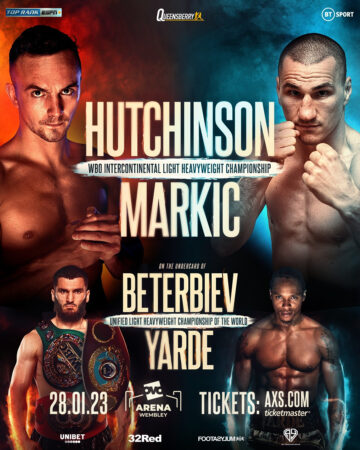 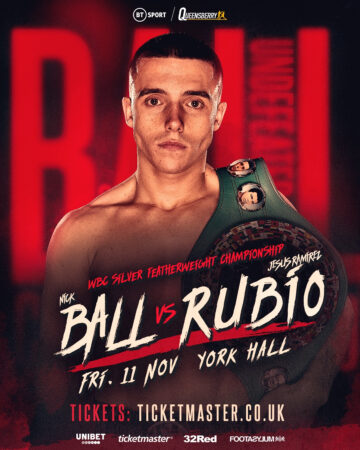 Nick Ball takes on a formidable Mexican test when he tops the bill at York Hall on Friday with a defence of his WBC Silver featherweight title, live on BT Sport.

The 25-year-old goes up against Jesus Ramirez Rubio, defeated only once in 24 professional fights back in 2017 and unbeaten in 15 with two draws.

A fearless Scouser versus a typically marauding Mexican carries all the ingredients necessary to create a thriller and Ball himself insists it will be must-watch TV.

“You don’t want to be missing this one,” confirmed Ball (16-0, 9 KOs). “It will be all-action because, you know, them Mexicans are born fighters and I am a born fighter.

“That is all you need to know really, two born fighters going at each other, it is only going one way, isn’t it? He has got a high KO-ratio, knocking 14 out and I have knocked nine out.”

“There is gonna be blood shed. That is what we are coming for!

“This is another one of these fights that will push me up the rankings and that is what I need. Obviously, if a world title opportunity comes up, which I think it will next year, I will take it. I’m coming for the world title, a proper belt, not a British title.”

Elsewhere on the York Hall card, Willy Hutchinson returns to light heavyweight action when he takes on Luca Spadaccini over 10 rounds.

Hutchinson (14-1, 10) made a successful return to the ring back in June with a 3rd round stoppage of Karel Horejsek, which was his first action since an unsuccessful tilt at the British and Commonwealth super middleweight against Lennox Clarke in March 2021.

Now training over in Spain, a rejuvenated Hutchinson will be looking to recapture the momentum that saw him considered as one of Britain’s leading prospects.

David Adeleye (9-0, 8) will hit double figures as a professional on Friday when he faces the Mexican Elvis Garcia over six rounds and will seek to ensure his name is added to the big heavyweight conversation moving forward.

“I had a little injury, so I was outside of the ring and we only managed to get the ball rolling not long ago,” reported the Ladbroke Grove man. “I am now back to my normal ways, but of course it was frustrating sitting at home watching other fighters who you know you can put hands on and do well against getting activity.

“Now I want to start fighting for titles and be in fights against people who are well known in the boxing world, names that are household names. I know what I can do and now I have to go out and execute it.

“Now I am nearly up to 10 fights, it is down to God’s timing and what will be, will be – and hopefully it will happen soon.

“It is a good time to be a heavyweight boxer, but I leave the business to my promoter and, if I do what I can do, it is inevitable that big fights will happen.” 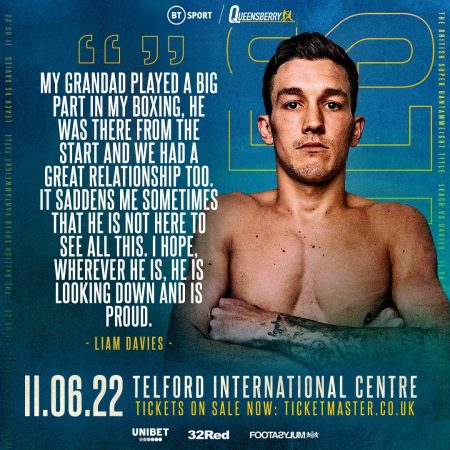 Liam Davies is on a personal mission to win the British title in honour of his late grandfather, who inspired him to take up the sport.

Local man Davies takes on the champion Marc Leach for the Lonsdale belt at super bantamweight on June 11 at the Telford International Arena.

Davies, 26, visited his grandfather’s resting place three weeks ago and vowed not to return without the spoils of British title success. The 11-0 former holder of the WBC International Silver title attributes his accomplishments in boxing to both his grandfather and dad Tristan, who currently trains him.

“I lost my grandad before and I fell out of love with the sport,” reflected Davies of his family’s loss in 2011.

“My dad was a boxer at the time and when he took over the coaching everything was new. We’ve landed on our feet now, we’ve come a long way together and now we are reaping the rewards.

“He deserves it, we put in a lot of hours in the gym with a lot of kids and I’m glad we can be on this journey together.

“The win is going to be big for the whole family because boxing is a big part of family life for us. I am flying the flag at the minute and I have got that bit between my teeth to make them all proud.

“With my dad we have come a long way and now we’re near the top of the mountain. We have just got these last few steps to get through and we’re there.

“My dad and my grandad are the main reasons and I have always been in boxing because of those two.

“My grandad played a big part in my boxing, he was there from the start and we had a great relationship too. It saddens me sometimes that he is not here to see all this. I hope, wherever he is, he is looking down and is proud.

“I want to take the British title to him. I took the English and the British is next. Let’s see who can stop me from doing that. I don’t think there are many.”

Tickets for the show at Telford International Centre on Saturday, 11 June are on sale, available from Ticketmaster.co.uk.

Liam Davies will challenge new champion Marc Leach for the British super bantamweight title on a big night of title action at the Telford International Arena on Saturday June 11, live on BT Sport.

In the other half of a British title double header, Birmingham’s Ijaz Ahmed and London’s Kaisy Khademi will go at it for a third time with the vacant super flyweight belt at stake and a final eliminator for a shot at the Commonwealth championship.

And in a fight where prospects put it all on the line, the unbeaten super lightweight Eithan James (8-0) from Northampton goes up against Connor Parker (13-1, 1 KO), Zach Parker’s cousin from Woodville in Derbyshire, in an eliminator for the English title. The Telford card also marks the return of former World Amateur champion Willy Hutchinson (13-1, 9 KOs) at light heavyweight following his unsuccessful tilt at the British super middleweight title against Lennox Clarke in March of last year. 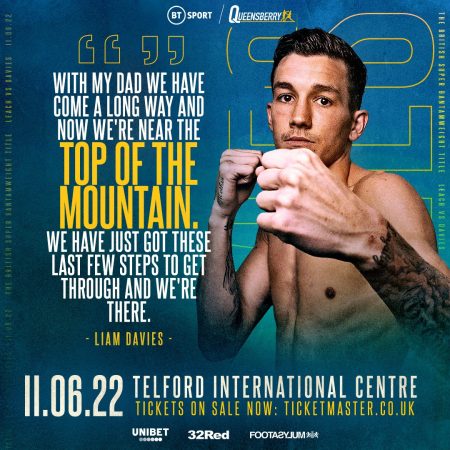 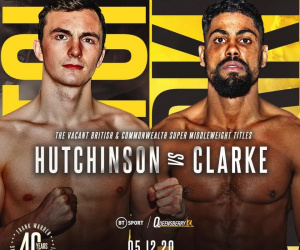 Fight Notes: Time of the stoppage was 1:05 of the 5th round.

Fight Notes: Sour was down a total of five times with the bout finally being waved off by the referee at 0:39 of round 2.

Fight Notes: Time of the stoppage was 0:83 of the 1st round.

Fight Notes: The score was 59-55 for a James points victory over 6 rounds.

Fight Notes: Adentan was making his pro debut but was taught a painful lesson that boxing is a tough sport as he was brutally knocked out at 1:51 into the 2nd round of their four-rounder. 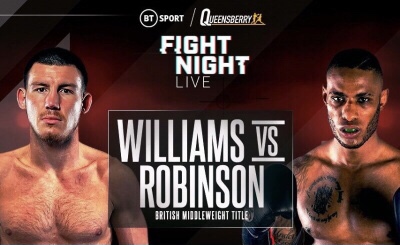 Fight Notes: Clash of heads left Robinson cut, then Robinson went down. Referee stopped the fight with Robinson seemingly not in any distress. Time was 1:28.

Fight Notes: Super middleweight bout. Fandino down in round 1. Referee Ian John Lewis stopped the fight at 2:49. Fandino’s last fight was against great Sergio Martinez (loss by KO in 7).

Fight Notes: Super featherweight bout. Referee Bob Williams waved the bout off at the time of 2:02.