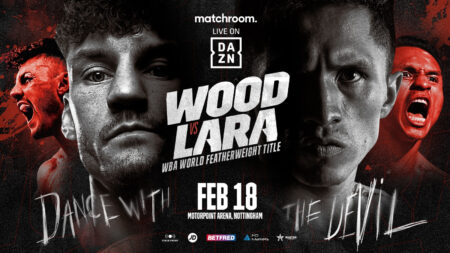 Matchroom Boxing’s 2023 schedule in the UK is set to begin with a bang at the Motorpoint Arena Nottingham on Saturday February 18 as hometown hero Leigh Wood puts his WBA Featherweight World Title on the line against big-punching Mexican Mauricio Lara, live worldwide on DAZN (excluding Australia and New Zealand).

‘Leigh-thal’ (26-2 KOs) memorably stopped Michael Conlan in the 12th and final round of his epic first defence of the WBA 126lbs title back in March 2022, knocking the Irishman out of the ring in brutal fashion to end their Fight of the Year stunner.

The Forest-mad Featherweight was heavily dropped in the opening round and looked to be heading towards his third loss in the pros before brilliantly fighting back to earn a brilliant win that will be talked about for many years to come.

Wood is now recognised as the World Boxing Associations only Champion at Featherweight after former ‘Super Champion’ Leo Santa Cruz relinquished his title on Monday December 12, and the 34-year-old wants to waste no time in adding more World Titles to his collection in 2023.

‘Bronco’ (25-2-1, 18 KOs) has been waiting patiently for his shot at Wood after their eagerly anticipated September 24 fight was postponed following a torn bicep suffered by Wood in sparring, but the Featherweight KO artist finally gets his dream World Title opportunity next month.

Lara is well-known on UK shores after he floored and ruthlessly finished Josh Warrington in a sensational upset behind closed doors at The SSE Arena, Wembley in February 2021, ending the IBF Featherweight World Champion’s unbeaten record.

He rematched Warrington in front of a sold-out Headingley Stadium in Leeds seven months later, but a nasty cut over the left eye of the Mexican in round two caused by an accidental clash of heads resulted in the contest ending in a technical draw.

The power-punching 24-year-old blitzed Emilio Sanchez in three rounds in March 2022 on the undercard of Roman Gonzalez vs. Julio Cesar Martinez before stopping Jose Sanmartin in three in another destructive show of brute force to put the 126lbs division on notice.

“Mauricio Lara has made things personal between us with the disrespect he showed me regarding my injury and my country,” said Wood. “I’m going to show him what I’m all about. See you on February 18 Nottingham – And Still!”

“I have been waiting for this opportunity for 2 years and I am not going to waste it,” said Lara. “In February 2021 I beat Warrington in England, now in 2023 I will do the same with Wood. The WBA 126lbs World Title goes to Mexico, that I promised to my daughter, my family, my team and to my whole country. Your time has come Leigh Wood, no “injury” can save you now from this.”

“Quite simply this is a fight that you have to watch through your fingers,” said Matchroom Sport Chairman Eddie Hearn. “After the drama of the Conlan fight last March, Leigh Wood is about to bring another night of drama to the Motorpoint Arena Nottingham against the brutal, fearless and much avoided Mauricio Lara. This fight leads Leigh to the City Ground in the summer but first get ready for an epic main event and all action card as we gear up for another FOTY contender in Nottingham on February 18.”

“What a fight this is to kick off the Matchroom UK schedule in 2023,” said Joe Markowski, CEO DAZN North America. “Both Wood and Lara are incapable of being involved in anything other than brutal, toe to toe, edge of your seat fights and I for one cannot wait for February 18. Watch this barnstormer live and exclusive on DAZN.”

Matchroom Fight Pass members will be able to purchase tickets from midday on Wednesday January 11. Priority ticket info will be emailed directly to eligible members ahead of the on-sale time.

General Sale tickets can be purchased via Stage Front and Motorpoint Arena Nottingham from midday on Thursday January 12.

Mauricio Lara: We will see if the injury is real or a lie 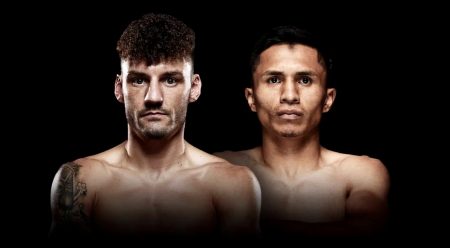 In Mauricio Lara’s team they only know that Leigh Wood suffered an injury and had to postpone his fight, originally scheduled for September 24th, but nobody has provided any evidence or a time frame for when the fight could be rescheduled.

Alejandro Brito, Operations Director for Bxstrs Promotions, which handles Lara’s career, reveals that they were not provided with details about the injury in Wood’s biceps, which put on hold a fight for Wood’s WBA featherweight title.

“They didn’t tell us anything”, Brito told IZQUIERDAZO. “They just told us that he (Leigh Wood) is injured, and that they would give us a call later to offer details. But we haven’t received that call yet. They haven’t told us anything, and we just want to know how much time (Wood will need for his recovery). They just told us that he (Wood) is injured, and we have to play by those rules, and we have to believe in what they said. But the thing is that Lara will not fight (on September 24th)”.

Brito says that they know the exact magnitude of Leigh Wood’s injury and that would define the time frame to reschedule the fight.

“They told us it was (Wood’s) biceps”, Brito explained. “But we don’t know if it is just a stretch or a tear in his biceps. If it’s a full rupture, he would be out for six months; but if it’s just a tear there would be a possibility (for the fight to be done) around the year’s end”.

Brito is in Las Vegas, where he hopes to speak to Eddie Hearn or Matchroom’s executives about the fight.

“Matchroom didn’t give us a pronunciation”, Brito said. “We are waiting for them to give us a confirmation. I wish we could have a little talk with them here (in Las Vegas), and know what is the plan, or the time frame. Something that I can tell Lara, for him to calm down”.

Alejandro Brito wants to believe that the injury is real and it is not an excuse from Leigh Wood’s side to just run away from the fight.

“I believe, and we believe in their honesty”, Brito explained. “Because we know that he (Wood) was not going to say ‘I don’t want to fight’. If such was the case, they would have said that since the beginning, that there was a risk or that they didn’t want to face the danger because (Lara) is very strong. But the contracts are signed. He (Wood) has no option (but to fight Lara). When Wood is recovered, he has no escape. He has to fight. We are in that dramatic pause, in which, as a manager, I have to tell my fighter to wait, to be patient. But I don’t know what to tell him, because the other side has not shown their face yet. We don’t know if Wood will be back in three, four, or six months”.

Mauricio Lara shares Brito’s disappointment about the postponement of the fight, his first world title opportunity, long awaited, since he knocked out Josh Warrington in a surprising fashion on February 13th, 2021.

The rematch with Warrington ended in a technical draw after an accidental head clash in just two rounds. But instead of a third fight to have a resolution in that rivalry, Warrington got an opportunity to fight for Kiko Martinez’ IBF featherweight title and won by a TKO.

Lara had to wait, and finally got his shot for Leigh Wood’s WBA world title. But now, with Wood’s injury, he has to wait again.

“To tell you the truth, I felt disappointed”, Lara told IZQUIERDAZO. “There are situations that just don’t happen. Maybe it is not my moment. Things happen. But we know that everything happens for a reason”.

Lara is trying to figure out how to deal with the postponement, both mentally and emotionally.

“Mentally, its a blow that we know how to assimilate”, Lara said. “But emotionally it is hard. (The cancellation) just 10 days before the fight is something that hurts. We completed a three months of work. But those are things that happen in boxing”.

Mauricio Lara says that he was not provided with any evidence of Wood’s injury.

“I didn’t see anything, he didn’t post anything on social media”, Lara pointed out. “Like when I fought with Warrington, when he posted that he was in the hospital. I trust in (Wood’s) honesty. We will see what happens. I trust in his honesty, and I wish him a quick recovery. I hope the fight is still in place. I hope he has the courage of a champion, the determination to prove himself. And we will know then if the injury was real or it was a lie”.