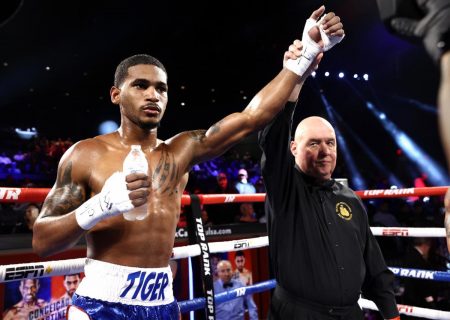 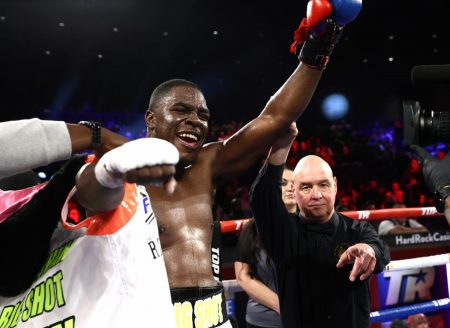 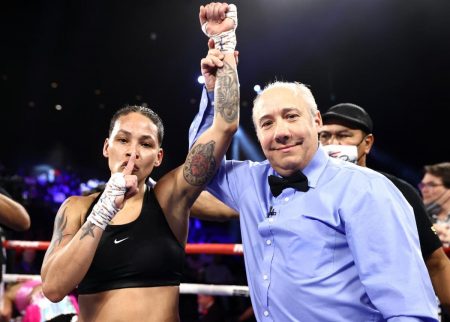 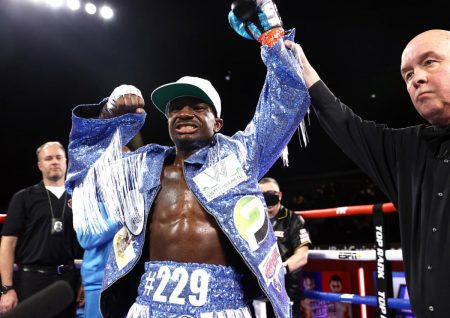 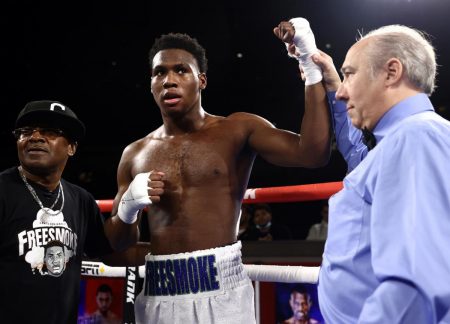 Split-T Management fighters weigh-in in Tulsa, Oklahoma ahead of tonight 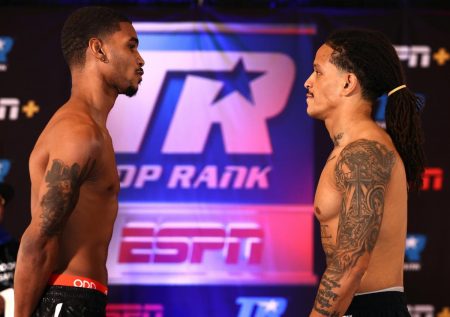 Tonight, Split-T Management fighters will be featured prominently at The Hard Rock Hotel & Casino in Tulsa, Oklahoma as four fighters under the top boxing management’s banner will be in action.

At 10 PM ET on ESPN, 2020 United States Olympian Tiger Johnson (1-0, 1 KO) of Cleveland, Ohio will make his 2nd start when he takes on Xavier Madrid (3-0, 1 KO) in a four-round battle of undefeated welterweights.

Johnson made it to the quarterfinals of the 2021 Olympic Games in Tokyo before losing to the eventual Gold Medal winner, Cuban Roniel Iglesias.

Johnson was very impressive in his pro debut when he stopped Antonius Grable in the 4th round on November 20th in Las Vegas.

Madrid has a win over Cristian Castillo (3-0), and is coming off a 1st round stoppage of Daniel Arriaga on November 20th.

At 7 PM ET, three more Split-T Management boxers will be featured on the ESPN+ stream. 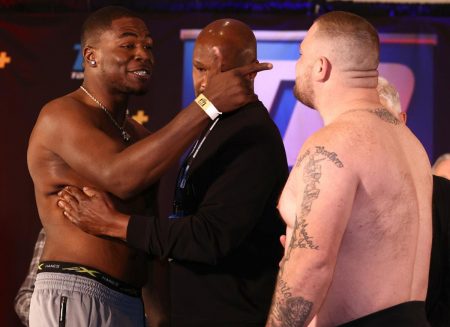 Shaw is co-promoted by DiBella Entertainment and Top Rank.

Brady of Albany, Georgia is 4-0 with three knockouts. The 20 year-old Brady has been a professional for two years.

He is coming off a unanimous decision over previously undefeated Roberto Negrete (3-0) on October 23rd in Atlanta. 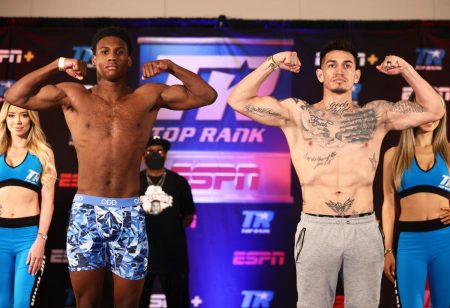 Dante Benjamin will be making his professional debut against undefeated Herman Rendon in a four-round light heavyweight bout.

Benjamin, 19 years-old of Cleveland, Ohio amassed over 100 wins as an amateur, and was a seven-time national champion as he was a 2016 and 2017 Junior National Champion, 2017 Eastern Regional Champion, and a 2018 Youth National champion. He also took first place in the Emil Jechev International tournament in Botevgrad, Bulgaria.

In 2017, he was named the Under Armour Fighter of the Year.

Rendon of Odessa, Texas is 2-0. Both of his victories are over undefeated foes as he opened his career with a win over James Land (2-0-1) In his most recent outing, Rendon won four-round unanimous decision over
Yhorhighness Rezzaq (2-0) in New Mexico 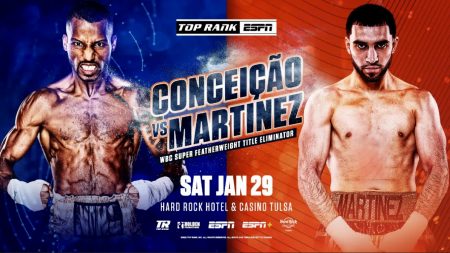 The bill is topped by the 10-round WBC 130-pound title eliminator between Robson Conceição and Xavier Martinez, and a 10-round junior lightweight co-feature featuring Mexican grinder Rene Tellez Giron and Puerto Rican contender Luis Melendez.

Conceição-Martinez and Giron-Melendez will be televised live on ESPN and ESPN Deportes (simulcast on ESPN+) at 10 p.m. ET/7 p.m. PT.

Barrera (67-7, 44 KOs) returned to the ring for only the second time in more than a decade in Tapia Promotions’ “La Ultima Batalla” (The Last Stand), while his counterpart De Leon (45-7, 35 KOs) made his first squared circle appearance in more than seven years.

Both fighters rewound the clock and looked sharp in the special attraction filled with nostalgia for boxing fans around the world. Barrera, who battled many of the sport’s best fighters including fellow International Boxing Hall of Famers Erik Morales (three times), Johnny Tapia, and Juan Manuel Marquez, as well as the sweet science’s lone eight-division world champion Manny Pacquiao, displayed many of the skills that made him ESPN’s No. 43 greatest fighter of all time.

The southpaw-slugging Ponce De Leon showed off his familiar awkward style that made him a matchup nightmare throughout his career. After six rounds of crowd-pleasing action, both fighters escaped unscathed and left the ring with their legendary status intact.

Mendoza’s gameplan to attack the body was evident from the onset as his relentless pressure and body blows quickly paid off with a left hook to the chin that buckled Zaleta. The undefeated Mendoza then forced his veteran opponent to take a knee in the closing seconds of the opening round after connecting with a punishing right hand to the body that took the air out of Zaleta.

Mendoza’s unrelenting pressure and forward movement paid dividends in the fourth round when he landed another vicious body shot that sent Zaleta down a second time. Referee David Rios stepped in to call a halt to the action at 2:23 of the round.

With the win over a legitimate former contender who challenged Leo Santa Cruz for his world title in 2012, Mendoza continues to knock on the door for a big-time fight on a big-time stage.

“We’re hoping to get the fight with Leo Santa Cruz. We’re ready for him,” Mendoza declared.

In other action, Albuquerque, N.M. native Xavier Madrid (3-0, 1 KO) scored the knockout of the night when he stopped professional debutante Daniel Arriaga in the initial stanza. Madrid connected with a short left hook flush on Arriaga’s chin, knocking him flat on his back and putting an end to the contest just a minute after the opening bell.

Madrid’s finishing sequence started with an overhand right that buzzed Arriaga, before connecting with the left hook that his counterpart never saw coming. The 29-year-old Madrid, who earned his first pro knockout, proved that he is one to watch in the welterweight division.

In a battle of two fighters making their pro boxing debuts, former Streetbeafs standout Jonathan Rice (1-0, 1 KO) scored a second-round TKO over Josh Holguin (0-1). After an exhausted Holguin punched himself out, turned his back on the action, and left himself open to the aggressive Rice, referee Rocky Burke stepped in at 1:20 of the second to put an end to the proceedings.

In an attraction of two fighters making their amateur debuts, Johnny “Nicco” Tapia, son of the legendary, late six-time world champion and Hall of Famer Johnny Tapia, came out victorious by earning a split decision over El Pasoan Brandon Lira.

The middleweight bout, which featured three two-minute rounds, could have gone either way. Lira started the fight on the front foot, coming out more aggressively than Albuquerque’s Tapia, bloodying his opponent’s nose. However, Tapia closed the bout by pressing the action. After hearing the judges’ decision, an excited Tapia celebrated in the ring with his mother/president of Tapia Promotions, Teresa Tapia.

The 31-year-old Chavez out-boxed Hill from start to finish, utilizing a vicious body attack on the overmatched Hill. Despite Chavez’s best efforts to score a knockout, a game Hill refused to go down. In the final round, Chavez pressed the action and nearly KO’d the 30-year-old veteran, who has only been stopped four times in 32 pro fights. All three judges scored the fight 60-54.