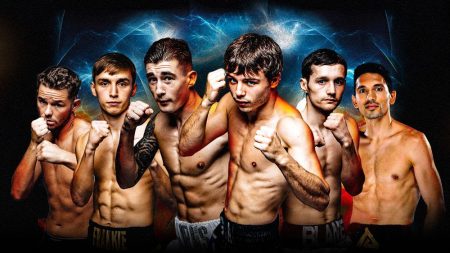 The unbeaten Joe McGrail and Steven Cairns head up an undercard packed with next generational talents at Probellum Liverpool II.

Probellum returns to the city on Saturday, October 15 when Peter McGrail headlines a hard-hitting show at the Eventim Olympia.

Former amateur sensation Peter (4-0, 3KOs) is being moved quickly towards title contention but younger brother, Joe, is an emerging force to keep an eye on too, and he delivered a punishing KO the last time he fought in front of his home fans.

Cairns (3-0, 2KOs), the well-supported Cork fighter, also produced a highlight reel finish at Probellum’s debut event in the city, earlier in the year, and the self-styled ‘Irish Takeover’ is a super featherweight destined for the top.

The classy Will Cawley boxes for the third time as a pro, in Liverpool, and the former Great Britain amateur (2-0) is ready to remind boxing fans why he is so highly thought of.

Joe McGrail said: “I produced the most explosive performance of my career in Liverpool in April and I can’t wait to be boxing in front of my fans again, on October 15.

“I’ve been on the road since then but I’m returning with bad intentions and plan on putting on a show. After my fight, I’ll be at ringside to watch Peter headline the night, in a big moment for his career.”

Alex Dilmaghani is the most experienced name on the undercard and the former world title challenger (20-2-1, 8KOs) sharpens his tools ahead of a potential clash with British and IBO champ Anthony Cacace, with a six-round contest.

Liverpool’s well-supported Frankie Stringer (2-0) impressed when making his pro debut in April and is ready to put on yet another display of intent, when he features in a six rounder at Probellum Liverpool II.

The popular Blane Hyland (6-1) showed his mettle last time out by getting up off the floor to defeat Stephen Jackson on points and the former Team GB southpaw fights again on next month’s show.

John Edwardson (3-0) kicks-off the card and looks to build on his promising start to life in the pro ranks with a fourth fight, since turning professional, earlier in the year.

Steven Cairns said: “After my devastating knockout at Probellum Liverpool last time, I hope I won some new fans and I fully intend to deliver excitement and entertainment for them all again, next month.”