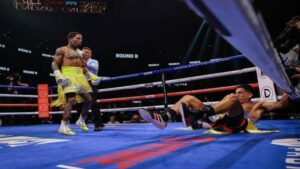 Gervonta “Tank” Davis, one of the biggest stars in all of boxing, put on a career-defining performance Saturday night live on SHOWTIME PPV from the award-winning State Farm Arena in Atlanta, scoring a scintillating 11th round TKO over the previously-undefeated Mario Barrios to capture the WBA Super Lightweight Championship in the action-packed Premier Boxing Champions event.

“I made it tough. I definitely could have made it easier but I went up two weight classes and I got the job done,” said the 26-year-old Baltimore native, who was headlining his second SHOWTIME PPV. “I hit him with some clean shots, but I’m the type of fighter that wants to catch you with clean shots. I don’t just want to throw any type of shot. The shots I was throwing were missing, but eventually I caught up with him.”

In a fight that lived up to its potential, Davis and Barrios combined to put on an unforgettable main event in front of a sold-out crowd of 16,570. After a slow opening four rounds in which Davis landed just 11 punches, the fight produced fireworks beginning in the fifth round. In the eighth round, “Tank” sent “El Azteca” to the canvas for both the first and second times of his career. First, Davis connected on a sweeping right hook that sent the former champion to the canvas. Moments later, a straight left hand by Davis dropped Barrios again. The brave Barrios rose to his feet, surviving Davis’ attempts to finish him in the eighth.

With International Boxing Hall of Famer and promoter Floyd Mayweather encouraging Davis in his corner, the southpaw came out rejuvenated in the eleventh round, realizing that the fight could be close on the scorecards. “Tank” dropped Barrios for the third time in the fight, this time with a left uppercut to the body. The bloodied Barrios rose again, only to be greeted with another barrage of punches from Davis. Referee Thomas Taylor stepped in to stop the fight at 2:13 of the eleventh round.

“I knew for sure if I catch him, I’m crackin,” Davis told SHOWTIME’s Jim Gray. “So I caught him, and it showed. My coach was telling me to go to a jab style but I’m a southpaw so they know I’m going to that jab side. So I would try and bait him in. I faked like I was going left, and I threw my right. And my hook over top, and that’s where I caught him.”

In the final six-and-a-half rounds, Davis landed 85 punches. He landed 45 percent of his power punches (82/182), while Barrios more than held his own, out-landing Davis in six of the ten completed rounds.

“I knew he was hurt. I just had to catch him at the right time,” Davis continued. “Floyd [Mayweather] came to me and was honest and said I was down,” continued Davis, who was actually ahead on all three judges’ scorecards at the time of the stoppage. “So he said ‘show me that you’re great.’ And you know how we do it in the doghouse, baby!”

With the victory, Davis now holds world championships in three different divisions simultaneously, a feat only accomplished by a few other fighters in history, including Henry Armstrong and Canelo Alvarez.

“He has the potential to be one of the greatest ever,” said Mayweather. “When I first met ‘Tank’ when he was 14 or 15 years old, I told him I’d make him a world champion. And that you’ll be one of the best someday. I’m proud of him.”

“I’ve never been a hater. Congrats to ‘Tank’,” said Barrios. “He came here and did his thing. It was nothing short of an exciting fight and that’s exactly what both of us predicted. He was the better man tonight, but I’ll definitely be back.

“’Tank’ is explosive. He caught me slipping and it’s boxing. At the end of the day, one punch can change the fight. That’s exactly what I felt happened. Congrats to him.”

In a back-and-forth co-main event, Orlando’s Erickson “Hammer” Lubin (23-1, 17 KOs) overcame some adversity to score the most important victory of his career over former unified world champion Jeison Rosario (20-3-1, 14 KOs). The WBC No. 1-ranked contender at 154 pounds, Lubin scored a sixth-round KO (1:42) in the WBC Super Welterweight Title Eliminator.

“I just followed the game plan,” said the 25-year-old Lubin, who improves to 6-0 since suffering the only loss of his career to 154-pound kingpin Jermell Charlo. “I would just go back to my corner after each round and Coach [Kevin] Cunningham and my team would just say, ‘Stick to the jab. Stay consistent with your jab.’ I’m way faster than him and I knew he had good power and he was trying to counter me. So I would fade him out and use my jab consistently.”

In the third round, Lubin nearly put an early end to the action with a huge frame that had Rosario on the back foot. In the closing moments of the round, Lubin landed a right hook that had Rosario wobbling back to his corner after the bell rang. Miraculously, in the next round, Rosario was able to recover and completely turned the tables, wobbling Lubin with a left jab.

The action turned up even more in the sixth round. Lubin, sensing that Rosario was susceptible to the body attack, landed a vicious left-right body combination that sent Rosario to his knees in what ultimately proved to be the turning point of the fight. Rosario, clearly hurt, was never able to recover and Lubin finished him off moments later against the ropes.

“I started to hurt him in the body as soon as the first round started,” the 2016 “Prospect Of The Year” Lubin said. “I started with the body and I saw him grunt. So I was able to hurt him to the body. I just wanted to distract him with the jab, then go downstairs. And I was able to get him out. I knew even if he got up after the knockdown that the fight was over. I know I’m a great finisher and I knew I was going to get him out of there as soon as I saw him drop.”

Lubin landed 44 percent of his power punches (80/288) and 20 of his landed punches were to the body. With the win, Lubin puts himself squarely in the picture for a second world title opportunity.

“I want a shot at the world title next,” he said. “I want everyone at 154 pounds. I’m No. 1 in the WBC but I chose to fight Rosario. I don’t duck anybody. I want to say that I fought everyone in my division when I win the world title.”

“Right now, I feel so bad,” said Rosario. “There is no lesson to be learned yet, everything is so raw still. I lost again, and it’s so frustrating. I was convinced I was going to win. The fight started to turn in the second round. I was just trying to keep up and listen to my corner. Lubin is a great fighter. He deserved to win. I hope he enjoys his victory.”

On the biggest stage of his career, Dominican Republic’s Carlos Adames (20-1, 16 KOs) rose to the occasion, scoring a highlight-reel third-round knockout over the streaking Alexis Salazar (23-4, 9 KOs) in the second fight of the pay-per-view. The time of the stoppage was 2:59 of the third round.

In the eventful and decisive third round, referee Jim Korb deducted two points from Adames for excessive holding. However, Adames made certain that the point deduction would have no impact on the fight’s result. He dropped Salazar with a lead left hook flush on the chin, a punch that Salazar never saw coming. The 25-year-old Mexican was able to get back to his feet, but Korb called for the stoppage when it was evident that a dazed Salazar was unable to continue.

“I was in control the entire fight, and that’s what reduced him to turning around at times,” said the 27-year-old Adames. “I was working with the jab to the body at first so that was working, and then I came with the left hook. I did my job and followed my strategy from A to Z and was able to succeed the way I wanted to.

“The key moment of the fight was when I managed to disrupt his focus. Once I was able to do that then it was easy pickings for me.”

“I was feeling good in there and I thought I was winning rounds,” said Salazar, whose 15-fight win streak was put to an end with one punch. “But he started grabbing me and that’s when he got me with an uppercut. That swung the fight. I just have to get back to work and keep looking for more opportunities.”

In the opening bout of the SHOWTIME PPV telecast, the hard-hitting Batyr Akhmedov (9-1, 8 KOs) scored a TKO victory over former world champion Argenis Mendez (25-7-3, 12 KOs) in a 12-round WBA Super Lightweight Title Eliminator. Mendez suffered a right hand injury and did not get off his stool to come out for the ninth round. The official time of the stoppage was 3:00 of round number eight.

“The fight went as planned,” said Akhmedov, who overcame the first cut of his career over his left eye after an accidental head clash in the second round. “We were expecting a tough fight like that. I’ve been out of the ring for a long time, so I needed to get those rounds in. My plan is to fight for the world title next. We knew he would be uncomfortable to fight and tricky. He was headbutting and elbowing me. It was good experience for me.”

In the battle of Olympians, it was Akhmedov who pressed the action and was far busier from the onset. He went to the body early and often, landing 57 body punches, wearing Mendez down as the rounds passed by. The 30-year-old Akhmedov landed 115 of the 306 power punches he threw, while the 34-year-old Mendez landed 84 of his 223 power punches, including just 13 body connects. At the time of the stoppage, Akhmedov was ahead on all three judges’ scorecards.

“Mendez is a tough guy who fights top fighters,” continued Akhmedov. “We knew it wouldn’t be a walk in the park. When I hurt him, my corner was telling me to slow down and take my time before going for the knockout.”

“I started feeling (injured) in the second and third round,” said a disappointed Mendez. “My knuckles were broken and I couldn’t throw a punch anymore after I cut him with my right hand in the first round. I tried to keep fighting from the fourth round on, but to no avail. It was useless.”

With the win, Akhmedov keeps himself in the running for top fights in the deep 140-pound division. Mendez drops to 2-4-2 in last eight fights.