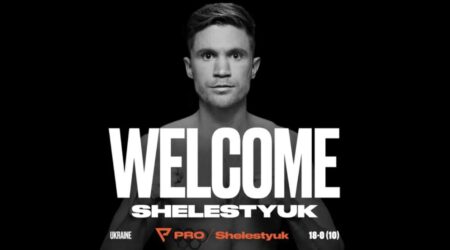 Shelestyuk (18-0, 10 knockouts) enjoyed immense success as an amateur, taking home a bronze medal at the 2012 Olympics in London, and also claiming a gold medal at the 2011 World Amateur Championships in Baku.

Since turning professional in 2013 he has performed extremely well in the 147lb division, winning a number of belts including the WBA Intercontinental and WBO NABO titles.

His high-quality boxing ability and expertise makes him a threat to anybody at welterweight, as Shelestyuk looks to kick on and achieve his dreams of becoming a professional world champion.

He is the latest big name to join forces with Probellum, following on from the signings of Regis Prograis, Badou Jack, Eimantas Stanionis, Arthur Biyarslanov, Ricky Burns, Eduardo Hernandez and Brandon Moore.

All 18 of Shelestyuk’s fights in the paid ranks have taken place in the USA, with the 35-year-old from Ukraine now given the chance to compete on a global stage after teaming up with Probellum.

His ability to fight all over the world is made possible thanks to the partnerships that Probellum have established, having already secured co-promotional agreements with Wasserman Boxing, Universum in Germany, Maravillabox Promotions in Spain, LNK Boxing in Latvia, Glozier Boxing in New Zealand, Shuan Boxing Promotions in the Dominican Republic, Team Ellis Boxing in Australia, Armin Tan Promotions in Indonesia, and Box Office Sports in Ghana.

“This is a new chapter in my boxing career and I’m really happy,” said Shelestyuk. “I was world champion as an amateur and now I want to become a world champion as a professional. I like that I will be able to fight all over the world and show people the art of boxing.”

“We’re pleased to welcome yet another high-calibre fighter to the team by announcing the signing of Taras Shelestyuk,” said Richard Schaefer, President of Probellum. “His incredible amateur pedigree speaks for itself, and we now want to help him achieve the same success as a professional.

“Boxing in Ukraine is arguably at an all-time high, with Oleksandr Usyk recently becoming heavyweight champion, and Vasyl Lomachenko is one of the best fighters in the world too, so Shelestyuk will soon be able to show the talent that he also possesses.”

Details on when Shelestyuk will have his first bout after signing with Probellum will be announced in the near future.