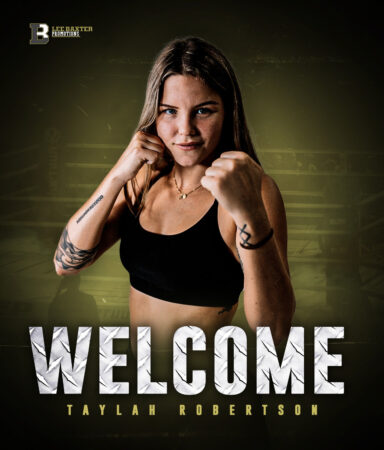 A Commonwealth Games bronze medalist in 2018, Robertson (6-1, 2 KOs) has established herself as one of the best 115-pounders in the world already, and is now taking it global. Robertson has signed a multi-year, multi-fight agreement with top Canadian promoter Lee Baxter Promotions, which will also see her appear on future events globally on DAZN.

“We’ve had our eyes on Taylah since her amateur days from seeing her at the Pan Am Games. It’s been obvious from the start that she is not only a brilliant boxer, but there’s a star quality about her,” said Baxter. “This has been a game-changing year in women’s boxing, we’ve seen so many names break through into the mainstream, and we truly feel that Taylah is going to be the next one.”

Robertson was an outstanding amateur in her native Australia, where she resides in Brisbane. A multi-time national and state champion, she represented Australia at the AIBA World Championships in 2019 as well. As a professional, Robertson’s only loss is to world title challenger and Top-5 bantamweight “Shotgun” Shannon O’Connell, a close split decision loss in a bid for the Commonwealth title in just her fourth fight.

Since the loss to O’Connell, Robertson has incredibly lost just two rounds. She and her coach and manager Glenn Azar have decided to return to more comfortable weight classes, focusing on 115 and perhaps 112. In addition to her win over Fernandez, who was 11-1 entering the bout, Robertson also dazzled her home audience on the undercard of Devin Haney-George Kambosos at Marvel Stadium in Melbourne. That win over Sarah Higginson was broadcast globally on ESPN+ as one of the featured undercard bouts.

Coach and manager Azar said “Our team is excited to team up with Lee Baxter Promotions especially as Taylah sets to fight an IBF World Title eliminator in November. We’re ready to push for a world title and be seen on a global stage. We believe Lee Baxter is the promoter who can do that for us.”

In a country buzzing with women’s stars, including Cherneka Johnson and Ebanie Bridges, Taylah is among Australia’s most popular fighters, with over 25,000 followers on Instagram. Robertson is also one of Everlast Australia’s few sponsored athletes.

“We think that with exposure to an even broader audience, Taylah is naturally going to become an even bigger star,” said Baxter. “But more importantly, we feel like she will be a world champion in 2023, focusing on super flyweight. As she’s shown in the past though, she’s a disciplined athlete. She can follow the Amanda Serrano model and win titles anywhere from 112 to 122 and beyond before it’s all said and done.”

Robertson is in action on November 5 in Australia against two-time world title challenger Chaoz Minawa, a bout set to be a title eliminator, and will make her North American debut in early 2023.