Taylor: Jake Paul will dominate Fury who has no knockout power or pop 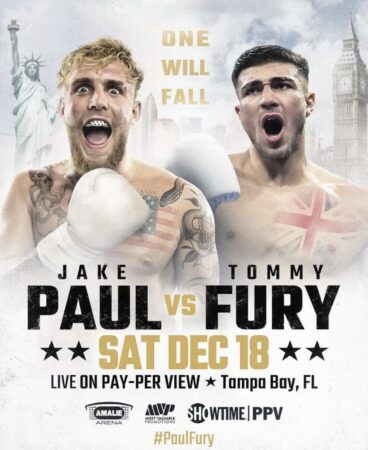 Anthony Taylor: “Tommy Fury has no knockout power or pop, he is a mediocre fighter. Jake is twice as good”

“Tommy doesn’t have knockout power. I felt every shot he hit me with, I wasn’t intimidated. I just kept coming forward. You can obviously tell that Tommy doesn’t have a lot of experience with sparring and fighting. On the other hand Jake is actually fighting high class athletes. You know, they might not be boxers, but they are world class athletes.

“Jake is twice as good as Tommy. Tommy only has that long reach. You take that long reach away and he becomes a mediocre fighter. Tommy is green, Tommy’s not anywhere near Jake’s level. I get it, people are going to say you’re biased because you train with Jake. But I fought Tommy, Tommy doesn’t have knockout power.

“When you look at Tyron Woodley, I guarantee you Tyron Woodley can knock out all the opponents that Tommy has fought. Same thing with Ben Askren. Ben Askren was out of his prime but a younger version of Ben would definitely have taken out everybody that Tommy’s fought.”

Anthony Taylor: “Having sparred with Jake, he uses the ring very well and has good strategy and patience”

“Sparring with Jake, he uses the ring very well. You saw him when he fought Tyrone Woodley, he used every inch of ring. Jake’s patient, he knows when to strike and he knows when to throw power and in his punch. Jake is just an overall better fighter than Tommy.

“Right now, everybody’s green, Jake’s green, Tommy’s green – you’re not going to really see strategically high IQs, but Jake showed some IQ against Tyron Woodley, he had a strategy, as opposed to Tommy when he fought me, there was no IQ. There was just him throwing punches. There was no strategy by Tommy.”

Anthony Taylor: Jake is going to dominate stationary Fury. He might most likely KO Fury, or TKO

“If I had to put my life on the line I’d predict Jake is going to dominate Fury. He might most likely KO Fury, or TKO. When you look at Tommy versus Jake, it’s more like Anthony Joshua versus Usyk. Think about it, Jake moves around well using footwork and has good head movement. He moves around like Usyk.

“When you look at Tommy, he’s very stationary, like Anthony Joshua. He relies on that one big punch. So that’s how the fight’s going to be. Don’t expect Tommy Fury to be bouncing on his tippy toes, but expect Jake to do that because Jake got a good ring awareness.”