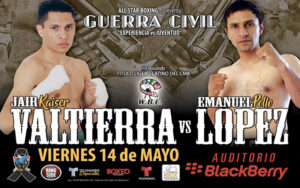 After more than a yearning year of absence, Boxeo Telemundo returns to Mexico City this Friday, May 14, at the Blackberry Auditorium.

The highlight fight, is between Mexicans Denilson Jair “Kaiser” Valtierra and Emanuel “Pollo” López, and the World Boxing Council Latino lightweight title will be at stake. The event is presented by All Star Boxing.

It was the night of Friday, March 13, 2020, when Boxeo Telemundo previously broadcast from Mexico City. One year, two months and a day later, they’re back!

This time, a clash of youth against experience. A tough, tempering and exacting test for Jair Valtierra (14-0 and 7 KOs) who is undefeated, fighting his fourth bout in Mexico City.

For Valtierra, at 19, this commitment not only represents a defense of his WBC Latino belt, but also the possibility of starting an international charge in the United States during the coming months.

His opponent is former world champion Emanuel López (30-12-1 and 14 KO’s) who`s seasoned experienced and ready for this important fight.

The card will begin this Friday at 12 AM ET / 11 PM C, through the Telemundo Deportes signal and its different platforms.

Zepeda vs. Lundy Reinforces Ramirez vs. Taylor May 22 Ramírez Looking To Upset The 2-1 Odds Against Taylor