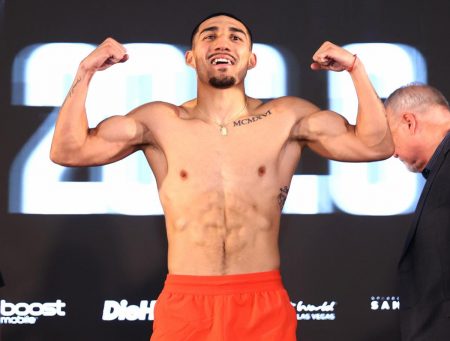 Saturday night at Resorts World Las Vegas will see the return of former undisputed Lightweight World Champion Teofimo Lopez move up to junior welterweight to start his quest of becoming a two-division world champion when he takes on Pedro Campa in a 10-round bout for the WBO International and NABF Junior Welterweight titles. 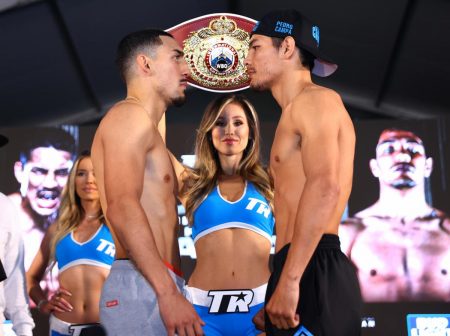 The fight, which will be televised by ESPN (10 PM ET) will serve as Lopez’ “Takeback” as he starts his road back to becoming world champion.

The fight heads a big weekend for Split-T Management as five fighters under the management banner will be in action between Las Vegas and Houston.

Lopez, who was the 2020 Fighter of the Year, will be back in the ring, looking to “Takeover” a second weight-class.

Lopez had a meteoric rise up the lightweight division as he scored many highlight-reel and spectacular knockouts over Vitor Jones (14-1), William Silva (25-1), Mason Menard (34-3) and Diego Magdaleno (31-2). Lopez won the IBF Lightweight title with a second round destruction over Richard Commey on December 14, 2019 at Madison Square Garden in New York City. Lopez followed that up by winning the undisputed title with a 12-round unanimous decision over pound-for-pound number-one Vasiliy Loamchenko on October 17, 2020. 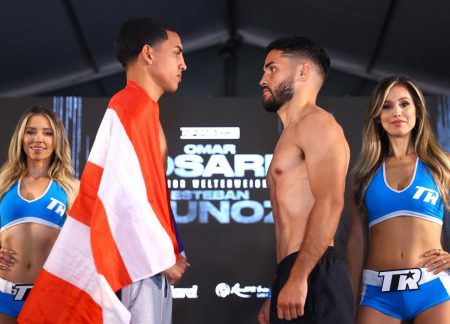 On the Undercard, beginning at 6:40 PM ET on ESPN+, undefeated Omar Rosario will take on Esteban Munoz in a six-round junior welterweight contest.

Rosario of Caguas, Puerto Rico is 7-0 with two knockouts. The 24 year-old Rosario already has wins over Uriel Villanueva (1-0), Wilfred Mariano (3-0), Marc Misiura (2-0), Raekwon Butler and his last outing when he took a six-round unanimous decision over Julio Rosa (4-0) on June 11th in New York.

Munoz of San Bernardino, California is 6-1 with four-knockouts. Munoz is coming off a third round stoppage over Kenny Williams on April 15th in Ontario, California,

Lopez and Rosario are promoted by Top Rank

Saturday night at The Bayou Center in Houston, Texas, three more distinguished fighters will be in action of a card that will be streamed live on BXNGTV.com

Undefeated welterweight Giovanni Marquez will take on William Marcell Davis in a bout scheduled for four-rounds.

Marquez, 21 years-old of Houston is 2-0 with one knockout. Vazquez turned professional on March 11th with a unanimous decision over previously undefeated Nelson Morales. in his last bout, Marquez took out 53-fight veteran Ariel Vazquez in two rounds on June 17th in Houston.

Camara has a record of 8-3 and is coming off a split decision loss to Kali Reis in a bout for Reis’ WBA/WBO Junior Welterweight world titles on November 19, 2021 in Manchester, New Hampshire. Camara also has wins over Erika Hernandez (5-1-1), Dalia Velazquez (5-1-1) and former world champion Heather Hardy (22-1).

da Silva of Sao Paulo, Brazil is 17-21 with six knockouts.

Camara is promoted by DiBella Entertainment.

Luis Acosta will look to get back in the win column when he takes on Abdel Sauceda in a lightweight bout scheduled for eight-rounds.

Acosta, 25 years-old, won his first 12 bouts in impressive fashion. He is coming off a loss to Edwin De Los Santos on March 11th.

Sauceda of Monterrey, Mexico is 11-1 with seven knockouts. The 24 year-old has won four in a row and is coming off a first-round stoppage over Jullian Guillen on December 20, 2019 in Monterrey, Mexico