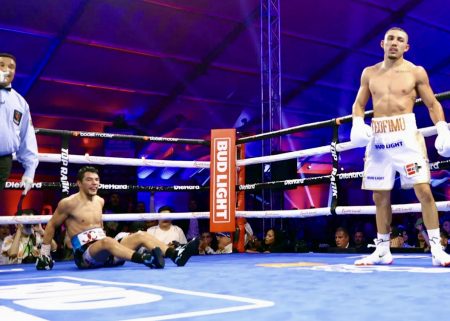 The Takeover is back. Teofimo Lopez, the former lightweight king, is now a junior welterweight force to be reckoned with. Lopez knocked out Pedro Campa in the seventh round Saturday evening in front of a sold-out crowd of 3,553 at Resorts World Las Vegas.

Lopez shook off the ring rust in his first fight since losing the lightweight title to George Kambosos Jr. Campa (34-2-1, 23 KOs) weathered the early storm, but in the seventh, lightning struck in the form of a left-right combination. Campa rose to his fight, but Lopez connected on more than a half-dozen power shots to end the fight in conclusive fashion.

Lopez said, “I was at 135 pounds for nine years. It was killing my body, since I was a teenage kid, man. We want Josh Taylor. We want these guys. We want {Regis} Prograis. We want {Jose} Zepeda. We want all the belts. We want to become two-time undisputed champion.”

There was another interested observer ringside, Oscar De La Hoya, who promotes Ryan Garcia. Lopez wants the biggest challenges and has no issue with a Garcia super fight.

“If Josh Taylor is too busy with his wedding and there’s nobody else around because the WBA belt is taken and the WBC is going to be fought with Zepeda and Prograis, then so fuc*ng be it,” Lopez said.

Puerto Rican sensation Xander Zayas (14-0, 9 KOs) picked up the NABO junior middleweight title with a fifth-round knockout over rugged veteran Elias Espadas (22-5, 15 KOs). Zayas knocked down Espadas with a left hook in the opening round and finished the fight in the fifth with a sweeping right hand.

Espadas, a 10-year pro, was stopped for the first time in his career.

Zayas said, “I feel amazing. I’m glad to be back with a strap around me, a regional title, something amazing. It’s special to me to bring my first belt to the island. It’s a step closer to my goal of becoming world champion.

“I promise it wasn’t intentional. I wasn’t trying to hit him low. I guess the punches were just landing there. Referee {Russell Mora}, I want to thank him. He gave me a chance. I just listened to the corner, and they told me, ‘Hey, forget about the body.’ Let’s get these head shots and then we’ll start working the body. And that’s what we did in round four on.”

Junior Lightweight: Andres Cortes (18-0, 10 KOs) UD 8 Abraham Montoya (20-4-1, 14 KOs), Scores: 79-73 3x. Las Vegas native Cortes had a satisfying homecoming, outworking the Mexican veteran over eight rounds. Cortes landed 42 percent of his power shots and outlanded Montoya in all but one round. Montoya stunned Cortes against the ropes in the sixth round, but his success was fleeting, as Cortes buckled down in the seventh and eighth rounds to remain undefeated.

Featherweight: Duke Ragan (7-0, 1 KO) UD 6 D’Angelo Fuentes (7-1, 4 KOs). Scores: 59-55 2x and 58-56 2x. The U.S. Olympic silver medalist passed the stiffest test of his young career, using a stiff jab and lateral movement to prevail in the battle of unbeatens. Fuentes had a big moment in the second round, momentarily stunning Ragan with a left hook. The Cincinnati native shook off the blow and closed strong down the stretch.