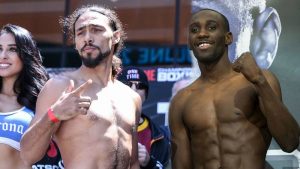 WBA world super welterweight champion Terrance Crawford (36-0, 27 KO’s) and former world champion Keith Thurman (29-1, 22 KO’s) are at it, whether it be via social media or interviews. What a fight it would make and I have a feeling it will:

“You don’t know what you want to do,” Crawford said about Thurman. “Because if a contract was sent to Keith Thurman, he would find a way out. So, stop playing with my name.

“That’s real petty at the end of the day and I’ll tell you why. We do this for a living. We do this to put food on the table. There’s people who fight in the streets for nothing, over stepping on some Jordans, homey. Over nothing! We fight for the world. We fight for our fans. We fight for our family. We fight for our pride. I love to fight and I’m gonna fight till the day I die. I’m the one who said I got an “0” and I’m not afraid to be beaten. Manny Pacquiao beat me. Can you beat me? Can you go toe-to-toe? I don’t know. Send the contract!”