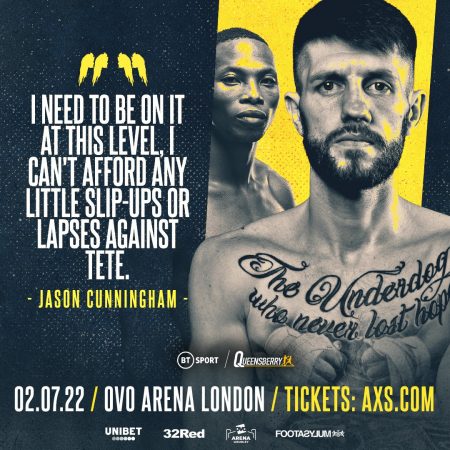 Jason Cunningham believes his confidence is at such a level that he can be optimistic over the prospect of world title success if he can overcome Zolani Tete on July 2.

Cunningham, 31-6 (7 KOs) and unbeaten as a super bantamweight, will enter the ring against the South African superstar feeling that he belongs in such company thanks to a self belief he has accumulated over a distinguished career where the ups have far outweighed the downs in recent years and he is now winning the plaudits he deserves.

In his last fight in April, the first in his promotional alliance with Frank Warren, he completely overwhelmed an unbeaten challenger to his European crown in Terry Le Couviour. The Frenchman was systematically chopped down to the body right from the off and probably the only surprise was it lasted until round six.

Even then the 32-year-old still picked a hole in his performance.

“I am happy with it, although there was one round where I thought I got a little bit complacent, but it was because I was having it all my own way really.

“I need to be on it at this level, I can’t afford any little slip-ups or lapses against Tete,” added the Iceman, who now exudes the aura of a champion as he sets about his work.

“I feel it and it is confidence. Up until you get to the point of a major title you are always questioning yourself. Then, when you get these wins, you think ‘I am good enough to fight for a world title and good enough to be a world champion’.

“I have got that confidence and that aura, 100%, and obviously it is showing in performances. It has been a brilliant year in total and I just feel the time is right now. It is my time, I am taking that confidence into the Tete fight and I truly believe I am going to beat him.

Cunningham revealed that a match with Tete didn’t come totally out of the blue and he considers the 29-4 (22 KOs) man as a clear and present danger, who will only serve to increase his own stock by confronting.

“It had been mooted a few times. I love a challenge and it is a fight I will get credit for, that is what I thought initially. He is a name, he has been over to these shores before, he has chinned Paul Butler and I thought this is the chance to prove how good I am, also to myself.

“I know he has been inactive for the last couple of years but, still, he has been there and he has done it at multiple weights. So, yeah, I have definitely got the bit between my teeth for this fight and I just think the timing is right.

“The time is now really, if I want to be world champion I need to beat Tete, simple as that.

“To have a scalp like that on your record… I just can’t wait really, I can’t wait for this fight and also to share the ring with him as well. Obviously the respect is there for what he has done but, at the same time, I am coming from a different angle where he is in my way and stopping me from getting to that next level and pushing for a world title.”

Tickets for ‘High Stakes’ at the OVO Arena, Wembley on Saturday 2 July are on sale now priced from £55 and available from AXS.com and Ticketmaster.co.uk.