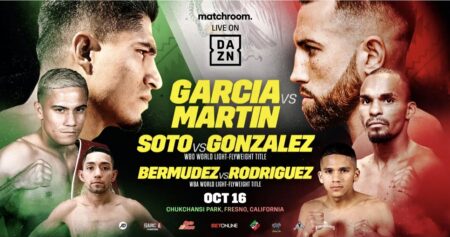 Former four-weight World ruler Garcia (40-1 30 KOs) last stepped through the ropes in February 2020, flooring Jessie Vargas at the Ford Center at The Star in Frisco, Texas, en-route to a points win over his fellow Mexican-American. The 33 year old is plotting a route towards more World title glory, and the Californian fan favorite plans to put on a show at the home of the Fresno Grizzlies.

“I’m very excited to get back in the ring and give my fans another night to remember,” said Garcia. “I’m looking forward to seeing everyone on October 16 in Fresno – it’s going to be a great night of boxing.”

Martin (38-2 13 KOs) has form and activity in his favor as he makes his American debut in the biggest fight of his career. The Spaniard recorded a wide decision win over Kay Prospere in the second defense of his European Super-Lightweight in April in his Barcelona backyard, and the 28 year old will be leaving everything in the ring on what he believes is potentially a life-changing night.

“I’m so excited for this opportunity,” said Martin. “The sport of boxing brings me the chance to change my life. There will be a before and after for everyone in this fight.”

A stacked undercard in support of the main event is led by two World Light-Flyweight title fights as WBO king Elwin Soto puts his crown on the line against Jonathan Gonzalez and WBA champion Esteban Bermudez defends his strap against Jesse ‘Bam’ Rodriguez.

Soto (19-1 13 KOs) entertained a packed crowd at AT&T Stadium on Cinco de Mayo weekend, stopping Katsunari Takayama in the ninth round of their clash on the undercard of Soto’s fellow Mexican star Canelo Alvarez’s clash with Billy Joe Saunders. That was a third successful defense for the 25 year old and the first inside the distance of the belt he ripped from Angel Acosta with a dramatic final round KO over the Puerto Rican in June 2019, and he makes his fourth defense on October 16 against Gonzalez in a bout in association with Zanfer Promotions.

It’s another Puerto Rican foe in Soto’s way in Fresno in the shape of mandatory challenger Gonzalez (22-3-1 13 KOs). The 30 year old is in his second World title tilt having travelled to Japan in August 2019 to face WBO Flyweight king Kosei Tanaka and the successful amateur landed the WBO NABO belt at Light-Fly in February 2020 and defended it with a fourth round KO of Armando Torres in May to land his mandatory status.

“I can’t wait to get back in the ring and defend my title,” said Soto. “Texas was a great night and I think this will be too. Gonzalez is a proud Puerto Rican contender, and we all know that when Mexico and Puerto Rico step through the ropes, there are fireworks, so the fans are going to love this fight.

“I’ve been waiting for this opportunity for a long time,” said Gonzalez. “Soto’s style fits me perfectly. It will be a war of Puerto Rico vs. Mexico.”

Bermudez (14-3-2 10 KOs) ripped the WBA strap from Carlos Canizales in May, stopping the defending champion in Mexico City inside six rounds in what was the Mexican’s first World title fight. The 25 year old faces a formidable test in the first defense of his crown against rising Texas talent Rodriguez.

Rodriguez (13-0 9 KOs) is one of American boxing’s bright young stars, and the 21 year old Texan gets his first World title shot in Fresno. Trained by Robert Garcia, Rodriguez will be aiming to emulate his WBA World Super-Flyweight champion brother Joshua Franco and bring more hardware back to San Antonio.

“This is going to be a great fight,” said Bermudez. “Jesse is a really talented fighter, and I am sure that he will be in great shape and ready to rock on October 16, but I worked too hard to become World champion to let it go in my first defense, so this will be a war.”

“I know it won’t be an easy fight, but I plan on walking out of the ring October 16 as the new World champion and bring the title home to San Antonio. It will be an honor for me and my brother Joshua to be World champions at the same time. I am training very hard and promise I won’t disappoint anybody.”

“I am really looking forward to getting back to the States with a cracking card in Fresno,” said promoter Eddie Hearn. “It’s great to see Mikey back in the ring, a future hall of fame star that always makes for entertaining fights and is hunting his next World title target – but this is a massive opportunity for Sandor and one that he will be desperate to take with both hands.

“We have two fantastic World title fights in the always exciting Light-Flyweight division with WBO champion Elwin Soto and WBA champion Esteban Bermudez putting their belts on the line against Jonathan Gonzalez and Jesse ‘Bam’ Rodriguez respectively – Fresno fight fans are in for a real treat on October 16.”

“It’s an honor to work with Matchroom and Mikey Garcia on this night,” said promoter Rick Mirigian, who is working with Matchroom on the event. “October 16 will be a night no-one will forget here in Fresno; I promise you that.”

Further undercard fights will be announced before tomorrows on sale launch.