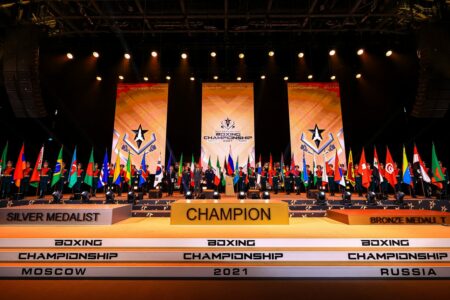 The final bouts of the  58th World Military Boxing Championships were held at the VTB-Arena in Moscow. In total, 231 boxers from 36 countries in ten weight categories for men and five for women performed at the Moscow tournament.

The team of the Armed Forces of the Russian Federation won seven gold, four silver and bronze medals and won the team classification of the tournament.The second place was taken by the national teams of Kazakhstan and Uzbekistan, which have three gold, one silver and three bronze medals each. The fourth place is taken by the team of Brazil (1-2-2), and the fifth – the national team of Belarus (1-1-1).

Member of the Board of directors of  the International Military Sports Council (CISM) Carlos Verdugo:

“It was an outstanding competition. Without a doubt I can say that this championship was the event of the year. On the name of CISM I am honored to acknowledge and congratulate the Ministry of Defence of the Russian Federation, the International boxing association,the Russian boxing federation and the Central Sports Club of the Army for this event. I would like to thank our soldiers assembled here for their devotion of sport and peace. Please be sure that the world and CISM are really proud of you.”

In total, 231 boxers from 36 countries in ten weight categories for men and five for women performed at the Moscow tournament.