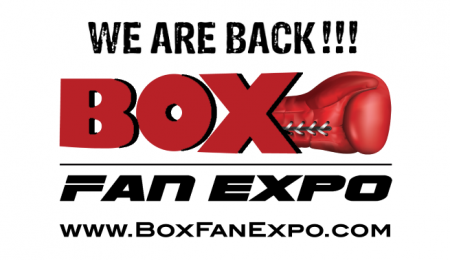 WE ARE BACK!!! The Box Fan Expo has announced its return to Las Vegas and its Sixth Annual Box Fan Expo for fans and the boxing industry. The event will return to the Las Vegas Convention Center on Saturday, September 17, 2022, from 10 a.m. to

5 p.m. during Mexican Independence Day weekend. The Boxing Expo will also coincide with the mega trilogy fight between Canelo Alvarez vs Gennady Golovkin, that will take place later that evening at the T-Mobile Arena.

The Box Fan Expo is thrilled to open its doors to boxing fans from all over the world, as well to all major boxing companies, promoters and industry people during this Mexican holiday weekend.

The Box Fan Expo is an annual fan experience event that coincides with some of the sports’ legendary, classic fights in Las Vegas, including Mayweather vs. Maidana II, Mayweather vs. Berto, Canelo vs. Chavez Jr., Canelo vs. GGG II, and Canelo vs. Jacobs. Centered in boxing’s long-time home – Las Vegas – this year’s Expo is a must-do for fight fans coming in for this legendary weekend, with dozens of professional fighters, promoters, and companies involved in the boxing industry. The Expo is the largest and only Boxing Fan Expo held in the United States. http://boxfanexpo.com – @BoxFanExpo

Tickets to the Box Fan Expo are available online at:

Those fighters plus more boxing celebrities took pictures, signed autographs for their fans who attended the Box Fan Expo. Fans also had an opportunity to purchase merchandise and memorabilia from fighters and companies involved with the sport of boxing

The Box Fan Expo also played host to the second edition of “Box Fan Expo Invitational 2019”. This was an incredible amateur show which showcased several highly ranked and top USA amateur boxers who competed against the best in their division and more importantly in front of thousands of boxing fans that attended the Expo. Those invited to compete had a chance to get huge exposure and get noticed by top boxing companies as well as industry people that were present that day during the event.

HELPING A GREAT CAUSE

The Box Fan Expo Invitational amateur show had an opportunity to collaborate and help Center Ring Boxing, a non-profit organization that was established in 1994 in the Las Vegas area. Their Mission is to facilitate programs for youth, ages 8 to 18 and their families. They promote and improve image of boxing as a sport and provide positive interactions that facilitate educational, physical, mentoring programs which is a great positive influence and mental growth for those young kids looking to improve their self-esteem and personal lives.