“The Big Belt Championship” in Texas, USA on September 17 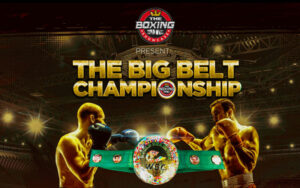 This morning the official presentation was made (via zoom) to officially announce the start of the national tournament “The Big Belt Championship” that will take place at the legendary Austin Coliseum on September 17th.

This mega event, whose main objective is to boost 4-round boxers throughout the United States, is presented as one of the most important tournaments in Austin, Texas, as although it is a state with important boxing activity, “The Big Belt Championship “will add an extra special ingredient for starters.

The tournament has come about thanks to the initiative of the promoter The Boxing Showcase and the support of the World Boxing Council and will take place in different stages. The participants will clash in direct elimination phases. The winner of each division will advance until they reach the grand -final, where the victor will be recognized with the emblematic Green and Gold Belt . All of the cards will be broadcast on international television; in Mexico, through AYM Sports.

The tournament organizers explained that “The Big Belt Championship” will be held with the participation of boxers from the following divisions, for women: fly, bantam, feather and light and for men, fly, bantam, feather, light, welterweight, middle, light heavy and heavy.

The scheduled dates of the tournament are: September 17 in Austin; Texas, October 1 and 29 in Dallas, November 5 in Laredo, semi-final 1 on November 12 in Fort Worth, semi-final 2 on December 17 in Mc Allen and the grand final on January 28 in Houston Texas.

The organizers also exhorted all American 4-round boxers not to miss being part of this great tournament that will take them to the big stages and urged them to register before September 10 at: https://boxingshowcase.com/registration/

Important: all boxers who wish to register must have a professional boxer license, have no more than 6 fights and comply with the medical and physical examinations required by the Texas Department License & Regulation “Combative Sports.

World Boxing Council President Mauricio Sulaimán, stated this is the type of initiative that our sport really needs, since it has been demonstrated that the talent is there in the gyms. The only thing missing is that those boxers who dream of hitting the big time, need to be given with the opportunity, and that’s what “The Big Belt Championship” is now offering all of them.