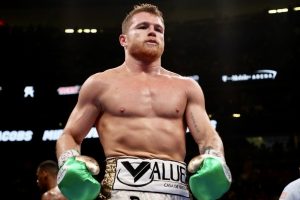 First thing: the WBC did not “order” the fight between Canelo and Yildirim. “Canelo requested to fight Yildirim for the title and that is one of the privileges he has,” Mauricio Sulaiman said to the Athletic.

DAZN will not be paying to stream a Canelo Alvarez vs Canelo vs Anvi Yildirim fight even after the WBC ALLOWED it.

They have no intention to pay for Alvarez to fight someone Andre Dirrell and Chris Eubank Jr. defeated (even if the Dirrell decision was disputed). It appears Golden Boy Promotions did not liaise with DAZN before the announcement and being fair, the announcement really was that the WBC had ordered it but with no official dates or specifics etc.

So, this now is an awkward one with the WBC wanting it, the fighters wanting it, the promoters want it but the contracted bill payer doesn’t. Throw in COVID-19 and no live gate fee (so purse amount is restricted) and there is now one big problem.

Alvarez (53-1-2, 36 KO’s) was meant to return to the ring September 12th. With that now just three weeks away, all now is so limited. Alvarez, Golden Boy and DAZN have fight dates put aside, so assuming Sept 12th is off, who and when will it be?

Yildirim is not at Canelo’s level, we all know that. Whilst I admire Canelo and his achievements, the fights that seem to be in-between anything that is considered a fair match-up seems to always be handpicked or picked with some form of disadvantage attached to the contract of the fighter in the opposite corner. A great example is former light heavyweight champion Sergey Kovalev who faced Canelo on 2/11/19 having fought prior on the 24/08/19 (just 10 weeks after a grueling fight in which Kovalev nearly lost to Anthony Yarde).

Canelo last fought on November 2, beating Kovalev and like many other fighters with the COVID-19 in place, are going stale as most are approaching a year out of the ring.

DAZN had an 11-fight deal with Alvarez and Golden Boy from October 2018 and one of the big issues within the overall issue is that Canelo still wants to be paid the amount agreed and with COVID-19 in place and with no live gate, this cannot or will be hard to meet. $40 million (the amount per fight) will not be reached fighting Yildirim or any other fighter that is not either a household name or at least recognised name or a top opponent.

The Gennady Golovkin rematch is the opponent and fight that DAZN most wants and will make it their third meeting. This would (probably) generate the figures needed. But (isn’t there always) Golovkin (40-1-1, 35 KO’s) has to make a mandatory defense of his title against Poland’s Kamil Szeremeta (21-0, 5 KO’s). It is not scheduled yet.

England’s Liam Smith (27-0, 19 KO’s) owns the WBA super middleweight title and is up for the challenge and so is Billy Joe Saunders (even if he pulled away from the possibility of fighting him on Sep 12th as it was not enough time to train sufficiently). Smith is willing but is not a household name so figures could struggle.

I was waiting to write this as I wanted to post with something more positive other than I doubt it is going to happen. It’s not even a definite no, just a probably not happening due to DAZN. Yes, it is very frustrating for the fans. Everyone could blame Canelo for demanding money that was signed agreed upon and duly signed for prior to COVID-19 (nobody could of seen that coming).

One thing is for sure….when contracts are drawn it will include situations like COVID-19!

Other than that, this is one mess that is not going to be easy to sort out keeping all happy. Can’t everyone just meet in the middle? Without the specifics and basing all this on what has been leaked or reported, it is hard to judge as everyone does not know the full facts and it is very easy to throw your view in from the sofa but….