The Fans Demand El Gallo vs. Chocolatito III Amid Controversy 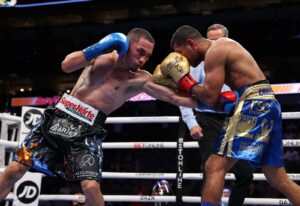 With the passing of the days, the numerous and controversial comments on the also controversial decision of the WBA and WBC Super Flyweight championship fight in favor of Mexican Juan Francisco “El Gallo” Estrada over Nicaraguan Román “Chocolatito” González, has made boxing fans around the world begin to speculate about what could happen in a third fight between the two warriors, which will break the 1-1 parity registered in their records.

According to statements made shortly after the clash (already a candidate for “Fight of the Year”), staged at the American Airlines Center in Dallas, Texas, the third fight would take place at the end of 2021, possibly in California. This was, at least, what the Briton Eddie Hearn, Director of Matchroom Boxing, said in front of the media.

Estrada and González fought for the first time 8 years and four months ago for the WBA Light Flyweight title held by the Central American, a four-time world champion and undoubtedly one of the best fighters in the world today, who on that occasion won a narrow victory on points.

The fight held last Saturday 14th in Dallas was marked by an intense and endless exchange of punches, so many, according to Compubox, that totalled 2,529, of which the eventual winner fired 1,212, connecting 314 (26% effectiveness), against 391 (30%) hit by the one from Managua. Those statistics mark the maximum for the 115-pound division (52.163 kilograms). Such numbers, added to those of their first fight, total 4,662 punches thrown by the two, a simply impressive and astounding amount.

RUNGVISAI: THE STONE IN THE WAY

With his victory, the fighter from Puerto Peñasco, Sonora, who defended his WBC title, put his 13-year record in the ring at 42 wins, 28 by KO, and three losses, one to Gonzalez; another by decision against Filipino Sor Rungvisai on 2/26/18, and whom he defeated on points on January 26/19; and the other one against his compatriot Juan Carlos Sánchez on the scorecards in May 2011, whom he knocked out in December 2019 in the rematch. For his part, “Chocolatito” has 50 wins, 41 by KO, with setbacks against Wisaksil Wangek, better known as Srisaket Sor Rungvisai (2) on March 18/17 by points, the other by TKO4 in September of the same year and, obviously, the one suffered a few days ago against Estrada.

We have read many articles about this recent fight, which we respect, describing it as “one of the best fights in history”. Modestly, we do not go to such extremes. It was indeed a very good and very tough fight, full of emotion, of even action and alternating dominance. In our personal score, we had a draw at 114 with 6 rounds won and 6 lost on both sides -with certain doubts in one or another round, most of them close and difficult to score-, for a draw that would have been a deserved reward for the tenacious effort of the two fighters who undoubtedly respected each other and were, therefore, cautious. But in truth we think (apologies to those who believe otherwise) that to say that it was “one of the best fights in history” is exaggerated, to say the least. Of course, both fighters put forth a good effort, battled hard all 12 rounds. But, we believe, they never put all the meat on the grill, as they say in bullfighting, and of course they duly rewarded the fans who paid for their tickets, congregated at the venue, and were fewer than they would have if the pandemic had not been in the way.

There is nothing more to say, but to return to the beginning of this article when we pointed out that, for now, the boxing world is waiting for the announcement of the already baptized trilogy between the Gallo who sang at the AAC and “Chocolatito” who, with the result, was like water on fire.

An expected trilogy that, it is worth adding, has a stone in the way with its own name: Srisaket Sor Rungvisai (50-5-1, 41 KOs), who has defeated both of them and who is Estrada’s next potential opponent in a mandatory fight. A big stone and a scary ghost on the road, which could spoil the party for both “Gallo” and “Chocolatito”. And to the fans.