The fruits of the WBA’s “Boxing is One” in Aguascalientes, Mexico 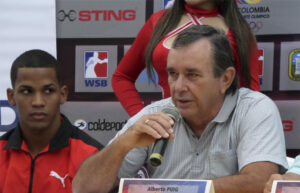 In 2018, the president of the World Boxing Association (WBA) sent a letter called “Boxing is One” where through 7 fundamental principles he committed to strengthen the values of this sport and to join bonds with Olympic boxing, and this is clearly shown in the historic event organized by Golden Ring and the Cuban Boxing Federation in Aguascalientes, Mexico in which Cuban Olympic boxers will fight with rules of professional boxing.

The WBA was the first organization to allow professional boxers to fight in the Olympic Games. Besides, it is the only professional body that has organized an Olympic-style tournament, such as the Future WBA Champions that took place in 2020 in the city of Medellin and received more than 100 athletes. It was also held in the city of Miami and Las Vegas in 2019, among other actions.

These actions have strengthened Mendoza’s bonds with the presidents of different boxing federations, especially the Cuban Federation and its president, Alberto Puig, the organizer of this historic event in Aguascalientes, who greeted the WBA President with affection.

“First, I think Mendoza is a great person. We have spoken with him several times and we really admire his ethics, we admire his capability, his intelligence, and we have been very satisfied. Every time we have talked, we have understood each other. And Mendoza is our friend, so we can continue conversing as many times as necessary or when there is mutual interest. And I want to take take the opportunity to send Mendoza a hug”, said Puig.

Gerardo Saldívar, CEO of Golden Ring, also likes to see that professional and Olympic boxing are coming together: “It is very important that both Olympic boxing and professional boxing have the same goal so they can go hand in hand as much as possible. In the end it’s the raw material, the boxers, who pass from one side to the other and if they find a common ground to walk, a goal to follow, I think it would be beneficial for them, for the trainers, and for the sport itself”.

For these reasons, the WBA celebrates this June 11th event in Aguascalientes, Mexico and sees it as part of what it has sown since 2018 with the “Boxing is One” campaign.

Charlo vs. Montiel June 19 winner to receive the WBC Freedom Belt Knockout, the most seminal pivot in boxing – It’s all about the KO