“The Mason Brothers” are coming! 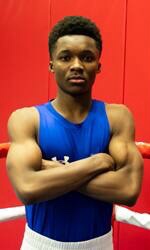 COLORADO SPRINGS, Colo. (November 16, 2020) – Cleveland light welterweight Abdullah Mason has a dream to establish himself and his four brothers in boxing.

Influenced by his older brothers and father/coach, Valiant Mason, Abdullah first got into boxing at the age of nine. His older brothers often gave him boxing tips and his father introduced him to boxing, asking his young son if he’d be interested in training at a local gym. Abdullah instantly fell in love with the sport and his passion for boxing has expanded as he develops his skills.

The 16-year-old Mason has been preparing to compete, despite being restricted due to the COVID-19 pandemic and its shutdowns, in the upcoming 2020 USA Boxing National Championships, December 5-12, at the Shreveport Convention Center in Shreveport, Louisiana.

“I’ve managed to train privately with my younger brother and three older brothers,” Abdullah explained. “We do our cardio, road work, and other workouts for my endurance and strength training, mostly at a private gym, partly at home.”

But he is moving up from junior to youth division for these National Championships, in addition to switching from the lightweight to light welterweight division. He’s been unable to evaluate any of his new light welterweight opponents but feels that boxers really don’t really know their opponents until they’ve stepped into the ring.

“It’ll be a great adjustment for me moving up from junior to youth,” Mason admitted, “especially me fighting three instead of two-minute rounds. I will be able to display more of my skill set and use my intellect in the ring to my advantage, instead of having to squeeze everything into two-minute rounds.

“With this being my first fight or competition since National Championships last December, due to the pandemic, this is a very important tournament for me, if not the most crucial, coming off a year layoff. I need to be consistent in every fight with a great, if not better performance, each and every fight.”

An intelligent fighter who can fight in the pocket when needed, Mason is just starting his boxing journey, which he hopes leads to an Olympic gold medal and world titles as a professional.

“My short-range goal is to gain experience, being the best and racking up as many wins as I can,” Mason concluded. “I’ll possibly be competing for an Olympic gold medal in the near future, if that’s where my boxing career leads me. I want to establish my name in the sport along with my four brothers, together known as ‘The Mason Brothers.’ Hopefully, we’ll all be able to fight and win world championships, earning our respect and recognition in boxing.”

The Rock ‘N Roll museum isn’t the only reason to visit Cleveland, it’s also the home of “The Mason Brothers,” and they’re coming rapidly on the scene.

Eddie Hearn on The Fury & Wilder Legal Battle Floyd Mayweather To Come Back in 2021 – It May Be an Exhibition?