The Mexican Female Boxer With The Most Successful Defenses 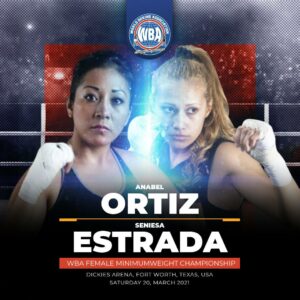 In her first approach to boxing, Avispa’s sting was only looking for a way to express an enormous pain within: that was how the girls at school or in the neighbourhood felt the fists of the then little girl, the same one who would later decide to join a gym in order to sharpen her aim with the desire to avenge the bruises that her mother carried.

Anabel “Avispa” Ortiz recounts in several interviews how the misfortune of suffering family violence at home led her to take her first steps between the ropes until she became the World Boxing Association Minimumweight Champion in 2013 when she defeated the emblematic Estuko Tada in Japan for the first time.

On a bike ride, Anabel saw in the basement of a church how some people were practicing boxing and that’s when she decided to start with the formal practice of the discipline. Motivated for many years by the desire to give her father the same punches he gave her mother, she began a sporting path that she never imagined would take her so far. Within the amateur field she completed a total of 200 fights having won the national amateur tournament at the Olympic Committee of Mexico among other championships.

Being a teenager, Anabel gave birth to her first daughter and took a break in her boxing career, which she later resumed until she was 19 years old, when she made her professional debut in the Mexican city of Toluca on January 12th, 2007.

Due to her extensive amateur career, the Tepic-born boxer soon had the opportunity to fight for a belt in her third professional fight: she won the vacant Mexican Light Flyweight title with a unanimous decision over fellow countrywoman Delia Lopez. In her seventh fight in 2009, she defeated Carina Moreno and became WBC Minimumweight World Champion, title she held until 2011, when she travelled to Japan for the second time, this time losing to Naoko Fujioka.

On May 24th, 2012, she flew to Argentina to fight for the WBA and WBO Light Flyweight Championships, which were in the hands of the Super Champion of the division, Yesica Bopp. Her three defeats were against high level fighters, which gave her a lot of experience, until 2013 came and she became the owner of the 105 lbs. WBA absolute championship.

Anabel Ortiz became an icon as the first Mexican to make so many world championship defenses. In addition to her achievement, her history has been the impetus for her to come to the top: Anabel had a second daughter when she got married after becoming a champion and, in that union, life always putting her to the test, she had to go through the same situation she wanted to get her mother out of. Under the mandate of “one marries for life”, Anabel suffered the violence of her husband until, thanks to the support of her team at the gym, she was able to take the reins to cut the karma by taking charge of her two daughters and putting boxing first.

This March 20th in Texas, Ortiz will be facing a great challenge against Seniesa Estrada in a fight that surely won’t let you blink.