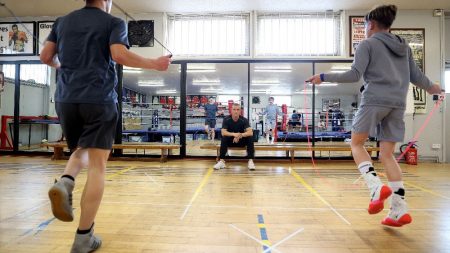 Paul Butler had been a two-time world bantamweight champion for less than two days before he returned to his other role in boxing – as an amateur coach with his boyhood club.

Butler defeated Jonas Sultan at Probellum Liverpool last Friday night with a career-best performance to claim the WBO interim world title but by Sunday morning, he was acting as a cornerman at a national amateur tournament.

The dedicated Butler was also back with the young hopefuls at Wirral CP Boxing Club, close to his Ellesmere Port home, on Monday afternoon, helping put close to 100 budding boxers through their paces with the team of coaches and offering his expert advice.

The 33-year-old is fully expecting the WBO to elevate him to full champion this week, after former title holder John Riel Casimero was forced out of their fight having contravened weight-making rules.

Butler, who first won the bantamweight crown in 2014, is now eyeing a shot at either Nonito Donaire or Naoya Inoue, who hold the other three world titles between them.

“I went out on Saturday night and watched the Tyson Fury fight but the next morning I was up and we were in Liverpool because the club had four kids in the England Boxing School Championships, so I was out there in the corners with them,” explained Butler.

“It’s something I enjoy and being part of this gym is something I grew up doing and I just think a little bit of help can go a long way.”

The WBO made Butler’s fight with replacement Sultan for the interim title but the Liverpool FC fan is hoping the sanctioning body elevate him to full world champion.

And Butler says as the WBO champion, he could tempt Donaire or Inoue into a bantamweight unification clash later this year.

READ THE FULL INTERVIEW WITH BUTLER, WHERE HE TALKS FURTHER ABOUT DONAIRE AND INOUE AND HIS CAREER BEST PERFORMANCE, HERE

“Listen, if I’ve been upgraded to full world champion, which is hopefully by Friday, then it’s a no brainer to go out to Japan and watch them two, if they get it on as has been reported,” he added.

“If that fight happens, the winner will have one belt left to try and win so why not box me for all the marbles?”