The task of Zorrro: Ellis Zorro vs. Dec Spelman Sept. 16 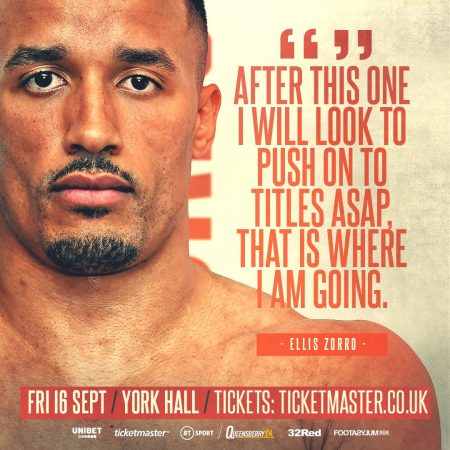 Ellis Zorro views his forthcoming fight with Dec Spelman as the perfect measure of his cruiserweight credentials at a higher level.

Even though Spelman has recently come up from light heavyweight, the Scunthorpe man possesses a strong pedigree and his will be seeking to further his own career at cruiser on the night, rather than provide a stepping stone for a championship hopeful.

For his part, Zorro does believe Spelman is his next step and that the quality of opponent vindicates his move to team up with Frank Warren following his competition success in Manchester that took him to 14-0 as a professional.

“This is the direction I want to go in,” said the 29-year-old. “I was pleased that Martin (trainer and manager, Bowers) and Frank have decided to put me in with such an opponent, rather than kind of give me an easy welcoming fight.

“After this one I will look to push on to titles asap, that is where I am going.

“You could have a tough international opponent and not get any credit for winning, but with this one I will get the credit. We know who he has fought, we know what he has done, how he has conducted himself in those fights, so I think it will be a test for me and a good fight.”

Zorro is not reading too much into Spelman’s jump in weight class, particularly since he has not fought at 175lbs since his Commonwealth title encounter with Lyndon Arthur in July 2020. Spelman subsequently took on Anthony Yarde weighing 180lbs before two fights nudging 200lbs.

“I did see an interview with him after the Arthur fight where he said he was drained at the weight. He is not going to be drained now, but it is a big jump up, although I am not a massive cruiserweight. I don’t know how tall he is, maybe 5ft 10″, while I am 6ft 1”.

“This will be his second or third fight at the weight now, so we will see. Other than his style, being a pressure fighter coming forward, I am not going to take too much from his fights at light heavyweight.

“He has fought (Shakan) Pitters and had the thing with Yarde and Arthur. He is a good fighter and I think he will come and try and push me back, put pressure on me, but I am ready for it.

“I am looking forward to it and stylistically it will be a good fight. Dec will try and drag me into ‘deep waters’ and he will know he has not got much of a chance if he tries to stand on the outside and box with me.

“So I think he will push the pace, try and stay on my chest, so the fans will be in for a good fight – which is what I need, with being on TV and on a Frank Warren show. I need to be in an engaging fight.”

Tickets for Bentley vs Morrison at York Hall on Friday, 16 September are on sale now, available exclusively from ticketmaster.co.uk.

Harry Garside pulls out of Gallen vs. Hodges & Hannant undercard Gavin Gwynne vs. Craig Woodruff on Sept. 17 live on Channel 5