The War: Hagler-Hearns and Three Rounds for the Ages – out now! 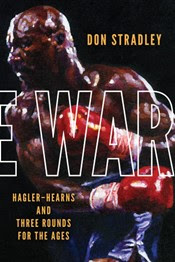 Acclaimed boxing book, The War: Hagler-Hearns and Three Rounds for the Ages (hamilcarpubs.com/thewar), is now out in paperback. With additional commentary from many who were there, expert writer Don Stradley shows the unlikely path taken by two fighters searching for greatness.

The battle between Marvelous Marvin Hagler and Thomas Hearns is remembered as one of the greatest fights of all time. But in the months before the two finally collided on April 15, 1985, there was a feeling in the air that boxing was in trouble. The biggest name in the business, Sugar Ray Leonard, was retired with no logical replacement in sight, while the American Medical Association was calling for a ban on the sport.

With Hagler–Hearns looking like boxing’s last hurrah, promoter Bob Arum embarked on one the most audacious publicity campaigns in history, hyping the bout until the entire country was captivated. Arum’s task was difficult. He’d spent years trying and failing to make Hagler a star, while Hearns was a gifted but inconsistent performer. Could Arum possibly get a memorable fight out of these two moody, unpredictable warriors?

The Hagler–Hearns fight is now part of history, but The War explores the many factors behind the event, and how it helped establish what many feel was boxing’s greatest era.

PRAISE FOR THE WAR

“The War is the best sports book I have read that captures the contradictory spirits of Reagan hyper-individualism and the collective support necessary to punch one’s way out of poverty. If you aren’t familiar with the fight, go to YouTube and watch it; then, read this book to understand how these two men are able to enact violence on each other with such wicked grace.”—Dave Zirin, The Progressive, “Favorite Books of 2021”

“Don Stradley is one of the best chroniclers of boxing’s big moments. In The War, he lives up to his reputation. The inside view of the Hagler-Hearns fight has never been captured on this scale. This book needed to be done, and the details and insights regarding this remarkable match—and the two men who made it special—are related brilliantly.” —Al Bernstein, Showtime boxing analyst and member of the International Boxing Hall of Fame

“This is outstanding, one of the best sports books I have read in ages. Captures beautifully eight of the greatest minutes in boxing history and the two fascinating characters responsible for them. Highly recommended.”—Mark Gallagher, The Irish Daily Mail

DON STRADLEY is the author of The War: Hagler-Hearns and Three Rounds for the Ages (one of The Progressive magazine’s “Favorite of Books 2021”); Berserk: The Shocking Life and Death of Edwin Valero; Slaughter in the Streets: When Boston Became Boxing’s Murder Capital; and A Fistful of Murder: The Fights and Crimes of Carlos Monzon, all from Hamilcar Publications. Slaughter in the Streets was named by CrimeReads in 2020 as one of “The Classics of Boxing Literature.” Stradley’s work has also appeared in The Ring, Cinema Retro, and on ESPN.com. He lives on Boston’s North Shore.

HAMILCAR PUBLICATIONS is a Boston-based publisher focused on professional boxing, true crime, hip-hop, jazz, and more. Our books appeal to fans of these fascinating, often-intersecting worlds as well as to readers who are simply passionate about great nonfiction storytelling and beautiful book design.