The WBC Orders Martinez vs. Arroyo & Ramírez vs. Browne 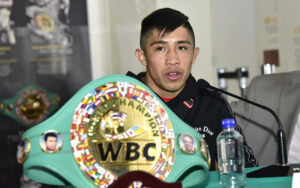 In a talk broadcast to all of Latin America, Sulaiman also announced that they ordered the fight between the featherweight champion, Jelena Mrdjenovich, and the multi-champion Amanda Serrano. The three fights have a free negotiation period until February 5, and if not, a purse-bid will take place.

In the case of ‘Rey’ Martínez, Sulaiman said, he was ready to make the mandatory defense against the highest ranked in the Puerto Rican Arroyo, with whom he was supposed to fight last August, but due to a medical setback it was put back. Martinez (17-1, 13 knockouts) comes from beating Moises ‘Taz’ Calleros in October and was not able to fight Francisco ‘Chihuas’ Rodríguez in December, due to illness.

For the Light heavyweight division, the WBC President informed that Artur Beterbiev has had some setbacks, the last of them having tested positive for COVID-19, and therefore they have asked the two highest available fighters to fight for the interim belt, being ‘Zurdo’ Ramírez and Marcus Browne the chosen ones. Gilberto (41-0, 27 KOs) is coming from beating Alfonso Lopez in December in his first free agent match, and Browne (23-1, 16 KOs) has not fought since losing to Jean Pascal in August 2019.

Finally, they also asked for negotiations to establish the fight between Jelena Mrdjenovich and Amanda Serrano. Canadian featherweight champion Mrdjenovich (41-10-2, 19 KOs) has just beaten Paola Torres in December in her first match on US soil, while multi-champion Serrano (39-1-1, 29 KOs) comes from knocking out Dahiana Santana in one round in December, in the Dominican Republic.