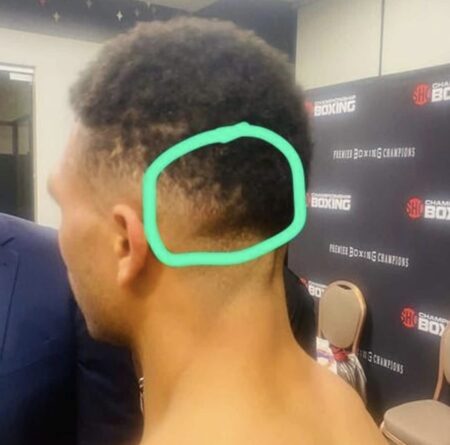 Welterweight contender, Thomas Dulorme (25-6-1, 16 KOs), has officially submitted a letter to the Nevada State Athletic Commission, disputing the result of his bout against Jaron Ennis (28-0, 26 KOs), in which he claims he was hit with an illegal rabbit punch to the back of the head. The fight took place at Mandalay Bay Resort and Casino in Las Vegas, Nevada, on Saturday, October 30, 2021.

Dulorme respectfully requests that the Nevada State Athletic Commission overturn the knockout loss to a no-decision due to the referee’s outcome-determinative error.

Dulorme and Ennis affirmed that they understood the rule. However, at the one-minute mark of the first round, Ennis threw a right hook that landed squarely to the back of Dulorme’s head. Despite his spirited efforts, the illegal blow rendered Dulorme dazed, unbalanced, and physically incapable of adequately defending himself against his opponent. Consequently, Dulorme was knocked down a second time 49 seconds later and could not rise to his feet before being counted out by Mr. Ortiz.

“I feel I wasn’t given the allocated time to recover by the referee, after getting hit from what was clearly an illegal rabbit punch to the back on my head, forcing me to fight at a disadvantage,” said Dulorme. “Jaron Ennis is a great fighter and I’m not taking anything away from his talent, I’m just disputing that I should have been given the allotted time to regain my composure. I’m hoping that Nevada State Athletic Commission will honor my appeal based on their rules.”