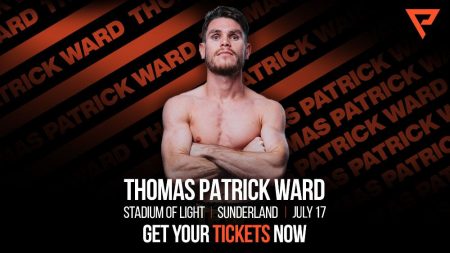 Thomas Patrick Ward wants to finally shake off his contender status and fight for a world title this year.

The featherweight returns to action on July 17, at the Stadium of Light in Sunderland, headlining a Phil Jeffries promotion, looking to preserve his status at the WBA’s No.1 ranked fighter.

Ward says he was in “cruise control” when defeating Alexis Kabore over 10 rounds at Probellum Throwdown in March and has repeated that he is ready for world title opportunities.

The 28-year-old, unbeaten in 33 fights, believes he will be world champion for a “long time” and says it is “outrageous” that there is a logjam at the top of the WBA featherweight division, delaying his chance.

Ward said: “I am ranked No.1 by the WBA and hopefully the right thing happens, and that’s me being made mandatory and then getting the title shot.

“I was No.1 contender with the WBO at super bantamweight for a period but the fight with Emanuel Navarette never happened.  I always seem to be there of there abouts and never get the opportunity.

“But hopefully that changes soon and I believe when I become world champion, I will reign for a long time.  I look at other fighters who have had that opportunity and they have not been good enough.”

Ward, the leading contender in the division, can’t understand why he’s still waiting for this shot.

“It’s outrageous and you’ve got people like me waiting for an opportunity, it doesn’t make any sense.  But whether it be Santa Cruz or Leigh Wood, both good fighters, I just believe that my chance will come.

“I’ve been in cruise control in my last few fights but when I’m facing these top fighters, then you will see the very best of me.”