Thor Bjornsson: Devon Larratt could be knocked out in the first round 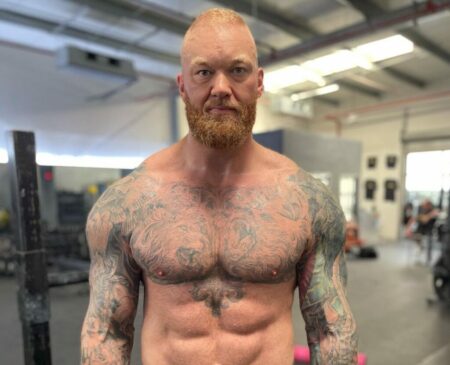 Former World’s Strongest Man Thor Bjornsson believes it could be a very early night when he takes on arm-wrestling legend Devon Larratt this weekend.

Thor takes on Larratt in the main event of a stacked card at Sport Society in Dubai on Saturday, which will be broadcast live on CoreSports.World.

Heavyweight sensation Martin Bakole is also on the bill, as he returns to action after almost a year to take on Haruna Osumanu, while undefeated star Avril Mathie meets fellow unbeaten fighter Jesca Mfinanga.

Thor was initially due to face Eddie Hall before an injury to Hall forced the fight between the two strongmen rivals to be postponed, with Larratt stepping in.

While Thor is grateful to the arm-wrestling star for taking the fight, he feels it could be over quickly if Larratt hasn’t trained properly.

Bjornsson told the Daily Mirror: “I have huge respect for Devon because he’s going into this on such short notice, with not much time, but to be honest, a fight is a fight and I’m ready.

“If he’s not ready then he’ll probably get knocked out in the first round, sadly, that’s just the truth. He’s obviously very new to boxing. He didn’t have a whole lot of time to prepare himself, but the promotion picked him as my opponent because I told them I would fight anyone.

“I don’t know too much about his strategy, game plan or style because he’s so new which is kind of what I need almost, because I feel that Eddie Hall will bring the same thing.

“The fight [with Eddie Hall] will still happen, just next year, hopefully sooner than later, but we’re just waiting on him to see how his recovery progress is going. From what I’ve heard it’s going well so I’m looking forward to us getting to fight.”