Thor Bjornsson & Simon Vallily Weigh In Ahead Of Tomorrow 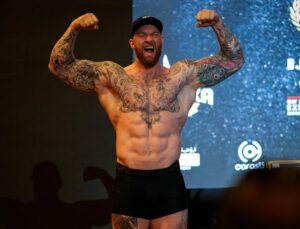 Thor Bjornsson will have over an 80lb advantage over opponent Simon Vallily as they weighed in on Friday ahead of tomorrow night’s highly-anticipated exhibition bout.

The two men will square off with one another at the Conrad Dubai on Friday, with the event being broadcast live around the world on Coresports.World.

Tickets for the event are also available, with a VIP Brunch package consisting of food, unlimited drinks for three hours and ringside VIP seating, priced at 1000 AED, A standard ticket to the event is priced at 350 AED, which includes one drink, with an upgrade drinks package also available.

The weigh-in took place on Friday, with Bjornsson coming in at 152kg (335lbs), while Vallily, who was wearing his fight boots, shorts and a shirt on the scales, was 116kg (255lbs), 80lbs lighter than Thor.

It will be Thor’s latest exhibition bout ahead of his highly-anticipated showdown with strongman rival Eddie Hall later this year. He had an exhibition bout back in January, where he went up against current cruiserweight contender and former WBO European light-heavyweight champion Steven Ward.

Vallily was a highly-accomplished amateur, winning a Commonwealth Games gold medal, and has challenged for both the English heavyweight and English cruiserweight titles. He is known for his knockout power, with five of his last six victories coming by stoppage.

Gates for Friday’s event open at 2:30pm local time, with the action beginning at 3:00pm, meaning that fans will be treated to non-stop entertainment throughout the afternoon.

The likes of Anthony De Bruijin, Stephane Fondjo, Jamie King, Murodjon Yokubov and Bader Samreen are all in action on the undercard, before the massive showdown between Thor and Vallily.