Thor “The Mountain” Bjornsson to Face Alex Simon in Exhibition 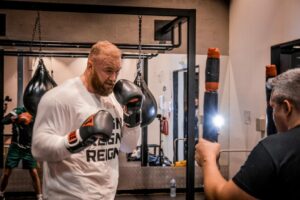 Thor Bjornsson will have his second exhibition fight later this year, as he goes up against Australian powerlifter turned MMA fighter Alex Simon.

The fight will take place in May, as Thor gets in more vital experience ahead of his grudge match with fellow strongman Eddie Hall later this year.

Thor has become one of the most recognisable men on the planet in recent years, after winning the 2018 World’s Strongest Man, 2018 World’s Ultimate Strongman, 2018 to 2020 Arnold Strongman Classic and Iceland’s Strongest Man every year from 2011 to 2020. He is also known for playing Gregor ‘The Mountain’ Clegane in the critically acclaimed HBO series Game of Thrones.

The fight between Thor and Simon will be broadcast live on coresports.world, with Thor back in action after his exhibition bout with Steven Ward back in January.

Simon is a former Australia’s Strongest Man, who went on to have superb success in powerlifting, setting numerous records, including in squat lift, bench press and dead lift.

He has since transitioned into combat sports, competing in kickboxing and MMA, and will provide Thor with the opportunity to fight someone with similar attributes to Hall.

More news on the exhibition bout between Thor and Simon will be announced in due course.