Tommy Frank looks to rebound from defeat against Matt Windle 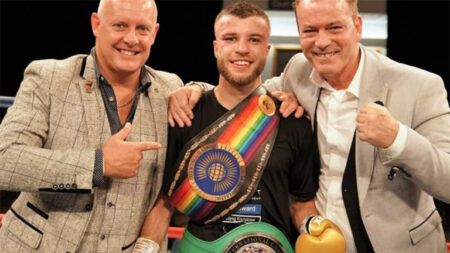 Tommy Frank gets the chance to put himself in the history books on Saturday September 18, when he takes on Matt Windle for the vacant British Flyweight crown – live on Fightzone.

If Frank, 13-2 (3), does manage to get the win in his home city at Sheffield’s Ponds Forge Arena, he will become the first fighter from the ‘Steel City’ to win the Lonsdale Belt at that weight.

‘Super’ Tommy will not only face a tough opponent in Windle on the night, the 28-year-old also enters the contest under pressure to revive his career, after recent back to back defeats to Mexico’s Hugo Guarneros.

Windle’s stock is on the rise and confidence high ahead of the eagerly awaited battle after putting in a tremendous 12 round shift in June; beating – and putting down – Scotland’s previously unbeaten Neil McCubbin in a ‘Fight of the Year’ certainty.

In what won’t fail to be an exciting night of boxing – it’s heavyweight action in the main event with Rotherham’s Kash Ali making the first defence of his International Boxing Federation (IBF) European Title against heavy-handed German, Roman Gorst.

Ali, 19-1 (10), picked up the best win of his career in May to win the IBF crown, with a comprehensive beating of Czech puncher, Tomas Salek.  The East European came to the UK with a fearsome KO record – having previously stopped 13 of 15 opponents – but was completely undone by Ali’s uppercuts, with the referee calling the action off in round three.

Gorst is another puncher that Ali will have to negotiate. The German has amassed six KOs from seven wins, with his single loss in October last year when he fought for Germany’s heavyweight crown. The 32-year-old is now back to winning ways after picking up a stoppage win in March and will eye Ali as the perfect opportunity to gate-crash the European heavyweight rankings.