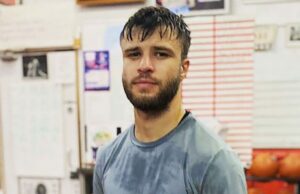 Sheffield gets served up with a tremendous British Title fight clash on September 18th at Ponds Forge Arena with all the action broadcast live on Fightzone.

In what will undoubtedly be an absolute war, two of the UK’s best little fighters – Tommy Frank and Matt Windle – will contest the vacant Lonsdale Flyweight belt, with many insiders anticipating a ‘fight of the year’ affair.

This is a huge opportunity for both men, not least Frank. The Sheffield man, 13-2 (3), will enter the contest on the back of two defeats to Mexico’s Hugo Guarneros and knows that a win against Windle will get his career back on track. Defeat would be a major setback.

Matt Windle – a poet in his day job and the Young Poet Laureate of Birmingham – has a deceiving 6-3-1 ledger. The 30-year-old – who is convinced that his career losses should be wins – was in a barnstorming fight-of-the-year contender of his own in June against Scotland’s Neil McCubbin, putting his younger rival down with a wicked body shot before winning a unanimous 12 rounds decision.

Headlining the card will be heavyweight action as Rotherham’s Kash Ali puts his International Boxing Federation (IBF) European crown on the line against a soon-to-be-confirmed opponent.  Ali’s only defeat in 20 outings was a 2019 disqualification reverse to Liverpool’s David Price. Since teaming up with trainer, Richard Towers, the 29-year-old has looked a much more mature fighter and his third round KO of Tomas Salek in May to claim the IBF Euro Title was a career best performance.

Also in title action on the night will be Grimsby’s Levi Giles and Walsall’s Shaun Cooper who will do battle for the Midlands Area Super Featherweight Title.

“As a fighter you have a good idea of whether you’ve won or lost,” reflected Frank on his June split decision loss to Guarneros, “and I definitely thought I’d got it by a couple of rounds. So there were was some miscalculation on how myself, Glyn and the corner team were reading the fight and how others, including the judges were scoring it.  I was really hurt after the fight and it’s taught me a massive lesson; with the level I’m boxing at you can’t afford to leave it in the judge’s hands, you have to really cement it so there’s no arguments at the final bell.

“To get me straight back into a British Title shot just shows what a great team I have behind me; massive credit to Dennis [Hobson], Steve [Crump] and Glyn [Rhodes]. This is going to be a brilliant fight between me and Matt [Windle]. He’s coming off the back of a good win, we’ve both been active recently, so it’s set up nicely.

“The first thing to say about Matt is that he’s a genuinely nice guy. We’ve sparred together recently, and he’s an intelligent man. He’s also ‘one hundred per cent’ a dangerous and game opponent. I just believe that if I do what I know I can do, then I’ll be there on the night with any flyweight.

“It has all the ingredients to be my night and for me to become the first Sheffield fighter to win this title. I truly believe this will be my coming out night.

“You can break down the fight and maybe say I have size advantage but Matt will be used to fighting bigger guys, and he’ll have his own game plan for me. I’ll do what I’ll do though and that will be enough to beat Matt – as game, tough and lively as I’m expecting him to be. I’ll get that British Title around my waist.”‘