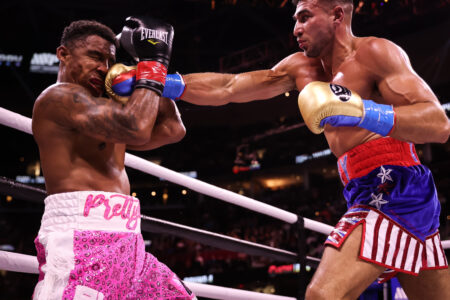 Tommy Fury (7-0, 4 KOs), the younger brother of heavyweight world champion Tyson Fury, successfully made his U.S. debut by scoring a four-round shutout over combat sports veteran Anthony Taylor (0-2). Already a crossover star after his runner-up finish on the hit U.K. reality TV show “Love Island”, Fury made a positive first impression on the American audience inside the ring but was unable to score the knockout he craved.

“I thought I had a good performance,” said the 22-year-old Manchester, England native. “You can’t forget that I only had 10 amateur fights and my dad wasn’t here with me tonight. I had a great time fighting in front of all these lovely people. I’m a novice in this game and I know that I have to work on everything. I’m nowhere near a finished product. I’m learning every single day and I’m just thankful to be here healthy and talking to you.”

Fury used his height and reach advantage in addition to his superior boxing skill to land 46 percent of his power punches on the outspoken former BELLATOR MMA fighter Taylor, who was competing in a professional boxing match for the second time in his career and first time since 2017. Fury now hopes to parlay his victory into a matchup with Jake Paul.

“Jake Paul should have an easy night against me, right? He has no excuse to not take the fight. Let’s get it on Jake Paul.”